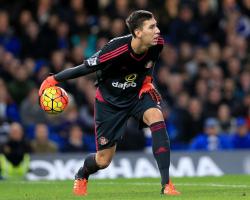 Pantilimon, the former Manchester City stopper, joins the Hornets on a three-year deal and will provide competition for current number one Heurelho Gomes

A short statement on the Black Cats' website said: "Sunderland AFC would like to thank Costel and wish him the very best for the future at his new club."

Watford, who are 12th in the Barclays Premier League after their 1-0 defeat at Swansea on Monday night, will gain a goalkeeper with over 50 appearances in the top flight

Pantilimon made seven league appearances for Manchester City in a three-year spell at the club before joining Sunderland in 2014.

Espanyol were also reported to be interested in signing him.