Cuellar Is Back In Training

... adding a midfielder – either Liam Bridcutt or Ever Banega – before Friday’s 11pm deadline. 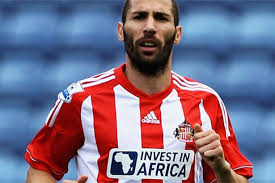 Gus Poyet: “Scocco can bring something special around the box we are missing.

“It’s still not completely done. It’s waiting for the medical and one or two bits.”

Alfred N’Diaye is expected to join Real Betis on loan until the end of the season, while Modibo Diakite’s agent has claimed “there is a 50% chance” of his client returning to Italy.

Ulisse Savini mentioned Parma and Chievo, but there has even been talk of a swap deal for Napoli’s Paolo Cannavaro. But Emanuele Giaccherini’s agent is adamant he is not leaving.

“(Parma general director) Pietro Leonardi contacted me because they like the player and seek a replacement for Jonathan Biabiany. Genoa made an attempt for Emanuele too, but he remains at Sunderland because he has a major contract with them and we want to respect it.”