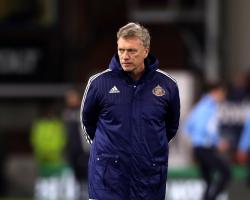 A second loss at Turf Moor in 18 days, this one in an FA Cup third-round replay, extended the Black Cats' winless run to six games as the Clarets booked a date in the next round with Bristol City later this month.

Sunderland were beaten 4-1 by Burnley in the Premier League on New Year's Eve and though the margin was not as great, the performance of Moyes' men was equally hapless as they failed to muster a shot on target until the 88th minute.

Moyes had made just three changes to his team and thinks their rotten run epitomises how thin his squad is.

"I've not wanted to use it as an excuse and I've genuinely tried not to, and I'm not using it here

The players that are out there I expect to play better, I don't expect them to make a couple of mistakes, but if I had other players, maybe I could take some players out and put somebody else in.

At the moment I can't do that.

"I've tried not to use it in any way as an excuse but it's a fact, we're short, we're finding it a struggle, we're putting near enough the same players out."

Any hope all of the answers lie in the transfer market has been scuppered by Sunderland's insistence that they are operating with a limited budget this month.

Though his hands are therefore tied, Moyes' fingers remain crossed as he seeks some additions to steer them away from the Premier League's bottom three.

"We're looking around, everyone knows our limitations but we are needing to add, due to the shortage of what we've got - long-term injuries, some who are close, boys at the African Nations Cup," he added.

"We're trying, we're always hopeful, always pushing to see if something can work

We need to see what happens

It's more than some one (player), that's obvious."

There are no such issues for Burnley boss Sean Dyche, who made seven changes and still witnessed his team progress thanks to goals late in either half from Sam Vokes and substitute Andre Gray.

An FA Cup run may be more inviting for the Clarets given their league position of 10th, 10 points clear of the relegation zone, and Dyche stressed that even with a rejigged line-up on Tuesday night, he still values the competition.

"It's the old twist in the tale - if you make changes and it doesn't work, you wouldn't be asking that question," he said when quizzed about giving his fringe players starts.

"Now it becomes important to get the 90 minutes, but before it becomes, 'Are you changing the team with that weird edge of disrespect?'.

"I made it clear I wasn't

I believe in the players, we've got a very good group and this showed it

There are players here that make it clear to me every day that they are ready."