A total of 123 Newcastle fans are subject to football banning orders, and will not be allowed to attend the Tyne-Wear game.

Police aim to avoid a repeat of last season’s game on Tyneside, when scores of people rioted after Sunderland’s 3-0 win over their arch-rivals.

To help achieve this, Sunderland supporters will be held back in the stadium for a short time after the final whistle. 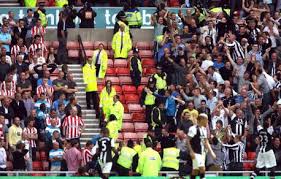 They will then be asked to wait until the immediate area outside the ground is clear of Newcastle fans before making their way to the transport.

Operations commander, Chief Superintendent Steve Neill, said: “The Tyne-Wear derby is a fantastic event that football fans across the region and country look forward to, and we’re working with clubs, local authorities and fans to make sure everyone has a safe and enjoyable day.

“We’re asking Sunderland supporters to work with us, as they did last season, and stay back for a short period of time after the game.

“This allows time to clear the immediate area outside for us to escort them from the stadium and to their transport.

“We’ve carried out hold-backs of supporters in the past at matches both at St James’s Park and the Stadium of Light, and they’ve worked well. Fans fully understand why we do it, and are co-operative with officers and stewards.

“The facilities will be open, so it’s as comfortable as possible for the waiting Sunderland fans, and we’ll bring supporters down as swiftly as possible.”

Sunderland fans are also being encouraged to use free coaches provided by the club.

These will leave the Stadium of Light at 10.30am.

Turnstiles at St James’s Park will open at 11am for the arrival of the first set of coaches from the Stadium of Light, and then 11.15am generally, with kick-off at 12.45pm.

Two Metro trains travelling direct from Sunderland railway station to Central Station in Newcastle will leave at 10.43am and 10.55am.

Sunderland will be looking to record their third straight win over the Magpies after they beat them 2-1 earlier this campaign.