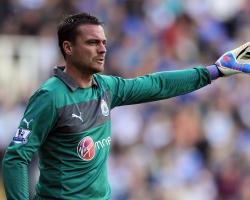 The 40-year-old, who made 199 appearances for the Magpies during a 20-year stay at St James' Park, has been drafted in following Costel Pantilimon's departure to Watford earlier this week.

Harper, who was a free agent after leaving Hull at the end of last season, will provide back up to number one Vito Mannone and highly-rated 21-year-old Jordan Pickford.

Manager Sam Allardyce told the club's official website, www.safc.com: "Steve will be a positive addition to our goalkeeping stable

He has vast experience at the top level and that can only be beneficial to Vito and Jordan as they continue to develop.

"He knows the club well and, as an Easington lad born and bred, he needs no introduction to Sunderland."

Harper spent much of his time at Newcastle challenging Shay Given for the number one spot, but played in the 1999 FA Cup final against Manchester United and also kept a clean sheet in a Champions League victory over Juventus in 2002.