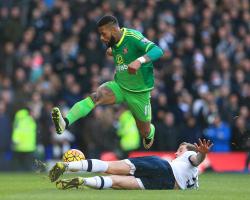 The 28-year-old Holland international, who headed for Wearside from Dynamo Kiev during the summer for an initial ÃÂ£8million, had been linked with Ajax and Roma after failing to force his way into manager Sam Allardyce's plans.

However, he has started the last three games and is adamant he is focused only on the Black Cats' fight against relegation from the Barclays Premier League.

Lens told the Sunderland Echo: "I never spoke about leaving

It's the media and all the things around me

We will see what happens

I'm a Sunderland player and I'm focused on Sunderland.

"I'm happy that I'm playing, but I wasn't with the result at Spurs

Let's hope I'm playing in the next game and we can get a good result."

Despite his difficulties on Wearside, Lens remains a saleable asset and with Allardyce looking to re-shape his squad, tough decisions may yet need to be taken.

Sunderland are understood to have an interest in Swansea's Andre Ayew, who caused them such problems early on in last Wednesday night's 4-2 victory at the Liberty Stadium, although they are yet to reach anywhere near the figure at which the Swans might consider selling.

In addition, whether or not the Welsh club would part with another of its better players to a relegation rival having already sold Jonjo Shelvey to Newcastle is a matter of some conjecture.

Meanwhile, Sunderland's on-off move for Lorient defender Lamine Kone could yet come to fruition with a loan deal until the end of the season an ongoing possibility.