Mackems - This Is Where We Are Going ...

Well it may have been late in opening and over budget, but the new stadium has certainly been worth the wait and the extra expenditure. To say that it looks superb, is really an understatement. 'Fantastic', 'tremendous', such words probably still don't do it enough justice. But what is really great about the stadium, is that it has its own individual identity and character. From the moment you see the Arch towering over the stadium in the distance, then you know that this is going to be something special, and special it is. Plus unlike a number of other stadiums around the world that host a number of sporting events including football, Wembley is primarily for football and is the home of the England team. No wonder that it is labelled the 'Home of Football'.

The old Wembley closed its doors in 2000 and was due to re-open in August 2005, but delays meant that the new stadium was not ready until March 2007. Designed by Foster & Partners and HOK Sport, the stadium which was built by Multiplex cost £737m to construct.

The stadium is totally enclosed and comprises three tiers, with both sides of the stadium being slightly larger than the ends. These sides are semi circular in construction and although on a larger scale are reminiscent of the similar designs at the Emirates & City Of Manchester Stadiums. Both these side stands large upper and lower tiers, with a smaller middle tier sandwiched in-between. This middle tier overhangs the large lower tier and has a row of executive boxes at the back of it. At each end there is a large video screen, which is moulded into the third and hence is an integral part of the stadium. The stadium has a complicated looking roof, that initially appears retractable and could if necessary be used to enclose the stadium from the outside elements. However, just over one third can be moved, so that the pitch will always be open to the elements. Unlike the old stadium whereby the players would enter the field of play from a tunnel at one end, the players now enter the field in the conventional way, onto the half way line from the North Stand, where the Royal Box is situated..
The most striking external feature of the stadium is 'The Arch', towering some 133 metres above it. It comprises of white tubular steel, that can be seen for many miles across London and looks particularly spectacular at night when it is lit up. Oddly you can't see much of the Arch from inside the stadium. It does though have a practical use in being a load bearing support frame for the roofs of the stands. It reminds me of some sort of theme park ride and I half expect to see people being propelled over it.... now that would be interesting to watch at half time!

A bronze statue of Bobby Moore, is situated in front of the stadium. The legendary England World Cup winner, gazes down on fans coming up Wembley Way.

Seeing Wembley for the first time, you can't help but be impressed with the sheer quality of the place. From escalators to transport fans up to the top tier to the 'landscaped concourse, you can see that no expense has been spared. Although not the most generous of leg room that I have come across, it is still more than adequate and there is good height between rows. Add to this that there literally is not a bad seat in the house (even seats at the very top of the upper tier have excellent views) and with the roofs of the stadium being situated very close to the crowd, then a full house should generate an excellent atmosphere. The top tier (Level 5) is particularly steep, which may cause a few to be a bit short of breadth as they reach the top, but at least this angle ensures that the spectators are kept as close to the playing action as they possibly can be.

Whereas most concourses in new stadiums so far built in this country are normally rather drab affairs, with a combination of breeze blocks and cladded piping, being predominantly on view, at Wembley it is different. For once someone has had the vision to hide these ugly features, with timber rafting and well positioned lighting, giving a modern stylish look. Apparently there is one refreshment till per 100 spectators in the stadium. Whether that is a good or bad ratio, in terms of queuing times, remains to be seen. The catering is provided by the same American company who also supply and run the catering at Arsenal. Prices have always been historically expensive at Wembley and the new stadium certainly follows in the tradition here; Various pies £4.50 (which although expensive are excellent), Stonebaked Pizza (£4.30), Foot Long Hot Dog (£5.40), Mexican style Nachos (£4.50), Chicken Dippers (£6), plus you can have a Pie & Pint for £8.30. The concourses themselves are mostly fairly spacious, have betting facilities provided by BetFred, a number of flat screened televisions, as well as a programme (nicely put in a carrier bag for you to carry home) and merchandise outlets. 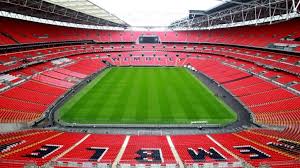 There are not many pubs located close to the stadium. The few pubs that are close by such as; J.J. Moons (Wetherspsoon), the Green Man (both near Wembley Stadium station) and the Torch (near Wembley Park tube station), are usually heaving many hours before kick off. On the nearby Wembley Retail Park there is Moore Spice 1966, which although being primarily a restaurant has a large separate drinking area which admits fans on matchday. I should point out that most of the pubs mentioned above will designate themselves as only allowing entrance to their premises for fans of one club or another who are playing at Wembley on that day. So if you intend going early and intend visiting one of these pubs, I would recommend telephoning them in advance to check whether your team's supporters are being allowed admittance.

Most fans tend to either drink in the centre of London before the game, or have drink near one of the London Underground stations located north of the stadium such as Harrow on the Hill or further afield such as Watford Junction or Ruislip. I have tended to drink in Harrow on the Hill, which is three stops away from Wembley Park on the tube and has a handy Wetherspoons and an O'Neills outlet, plus a number of other pubs and eating outlets. The good thing too is that if you park out in this direction, then after the game you are heading way from the masses who are normally heading back in the direction of Central London. Alternatively, alcohol is sold within the stadium in the form of; Carling, Carlsberg, Tetley's (all £4.70 a pint), Red & White wine (187ml bottle £4.50), Smirnoff Ice (275ml bottle £4.80) and various spirits (pre-mixed £5.50). 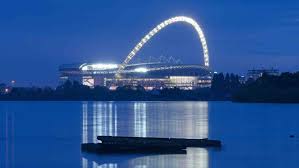 How To Get There And Where To Park

The stadium has been labelled as a 'public transport' destination, meaning that there is limited parking available at the stadium itself and there is also a residents only parking scheme in operation in the local area. The pricing and availability of stadium parking varies per event. More information and bookings can be made on the CSP website.

The stadium is well signposted from the end of the M1 & M40. Basically the stadium is just off the A406 North Circular Road.

At the roundabout at the end of the M1, tirn rigght onto the A406 (North Circular/West Wembley). Continue along the A406 for a couple of miles and then after crossing a metal suspended bridge, you will pass a McDonalds on your left. At the traffic lights with an Ikea Store on one corner bear left onto Drury Way. Keeping the Ikea store on your right go straight across the next two roundabouts. You will pass a Tesco petrol station on your right and then at the traffic lights turn left into Grand Central Avenue (B4557). The stadium is at the end of this road.

I would recommend parking at one of the tube stations at the end of the Metropolitan line such as Uxbridge, Hillingdon or Ruislip or at Stanmore on the Jubilee line and then take the tube to Wembley Park.

The nearest underground station is Wembley Park which is around a ten minute walk from the stadium. This is served by both the Jubilee & Metropolitan lines, although it is best to take the latter as it has less stops. Wembley Central is slightly further away from the stadium and has both rail & underground connections. This underground station is served by the Bakerloo line, whilst the railway station is on the London Euston-Milton Keynes line. The nearest train station is Wembley Stadium which is on the London Marylebone-Birmingham line.