MAN UNITED:- David Moyes will assess the fitness of striking duo Wayne Rooney and Robin van Persie before finalising his starting line-up for the Capital One Cup semi-final clash with Sunderland at Old Trafford.

Rooney (groin) and Van Persie (thigh) have missed four and 10 matches respectively, but were due to return to training on Monday, leaving Moyes to decide whether to involve either player as United looked to emulate their achievements of 2009 and 2010 by overcoming a 2-1 first-leg deficit.

Skipper Nemanja Vidic starts a three-match ban, which is expected to see either Chris Smalling or Phil Jones line up alongside Jonny Evans in central defence.

Defender Vergini and goalkeeper Ustari, who only completed his move to the Black Cats on Tuesday afternoon, will both travel to Old Trafford with the latter almost certain to be on the bench.

Striker Steven Fletcher has suffered no adverse reaction to the Achilles problem which prevented him from starting against Southampton on Saturday, but defender Carlos Cuellar (hip) and keeper Keiren Westwood (shoulder surgery) are still out. 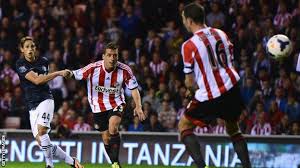 Manchester United must overhaul Sunderland's 2-1 lead on Wednesday if they are to reach the Capital One Cup final.

United, who have won the competition three times in the last eight seasons, will take on Gus Poyet's Black Cats in the semi-final second leg at Old Trafford having been narrowly beaten on Wearside just over a fortnight ago.

Fabio Borini's controversial 64th-minute penalty settled the first-leg tie after a Nemanja Vidic header had cancelled out Ryan Giggs' own goal at the Stadium of Light.

Despite United's poor form thus far in 2014 - they have lost four of their five fixtures since the turn of the year - David Moyes' side remain strong favourites to get through and retain their best chance for silverware this season.

But Sunderland have lost just one of their last 10 games in all competitions and have impressed in their most recent Premier League away fixtures, taking seven points from trips to Everton, Cardiff and Fulham.

Around 9,000 Sunderland fans are expected to make the trip west to cheer on their side in their bid to reach their first major cup final in 22 years, and Poyet has urged his players to go on the offensive.

Their first-leg win aside, Sunderland's only other victory over United in the last 25 meetings also came in the League Cup - Kevin Phillips scoring an extra-time winner in a fourth-round tie in November 2000.

United have beaten Sunderland already this season - Adnan Januzaj scoring both goals in a 2-1 Premier League away win in early October - and boast a strong record in League Cup semi-final ties, having won eight of their last nine.

Manchester City, who completed a 9-0 aggregate victory over West Ham on Tuesday night, await the winners in the Wembley final on Sunday, March 2.