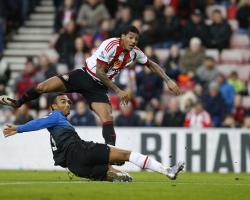 The Black Cats turned in an awful first-half display, but were trailing only by Benik Afobe's 13th-minute goal when Dutch full-back Van Aanholt levelled in stoppage time before the break to set up a frenzied, but ultimately fruitless, second 45 minutes.

After five wins and 10 defeats, Allardyce was at least able to console himself with some tangible reward on a day when his team for too long failed to reach the standard they set in victory over fellow strugglers Aston Villa and Swansea.

The 61-year-old had admitted before the game that this was one his side could not afford to lose, but the message seemed not to have got through to his players, who turned in a largely insipid first 45 minutes.

Bournemouth, with Dan Gosling and Harry Arter pulling the strings in midfield and Junior Stanislas causing all sorts of problems wide on the right, dominated the first half and could really have had victory wrapped up by half-time.

They kicked off leading the Premier league in terms of goals scored in the opening 15 minutes of matches and increased their tally to eight when Afobe dived to send in a firm header to which keeper Vito Mannone got a hand but could not keep out.

It might have been 2-0 within two minutes had Charlie Daniels' cross been in front of Stanislas rather than marginally behind him, and he only succeeded in kneeing the ball over the bar.

If Mannone was at fault for the goal, he came to the rescue twice in quick succession, parrying firmly-struck efforts from Stanislas and then Afobe with his defence in tatters.

The Black Cats were simply dreadful, surrendering possession in promising positions all too easily and struggling to keep the visitors at bay, but they finally summoned up a response as the half drew to a close.

Artur Boruc, who had earlier clawed away a John O'Shea header, reacted smartly to claim Fabio Borini's deflected 41st-minute shot, but he was finally beaten in stoppage time when Borini laid the ball perfectly into Van Aanholt's pass and he dispatched it with venom.

But it was the Cherries who returned in more positive mood after the break and they might have regained the lead within four minutes as Stanislas was set up by Gosling, only to fire high and wide.

Adam Johnson tested Boruc with a speculative effort as the game opened up, but the keeper was beaten when Jermain Defoe curled a 56th-minute effort past him, but agonisingly wide of the post.

But the Poland international was in the right place at the right time to beat away Billy Jones' header from Johnson's cross two minutes later.

Jeremain Lens and Yann M'Vila both fired across the face of goal as the home side pushed for a winner, but substitute Lewis Grabban might have snatched the points seven minutes from time, but stabbed wide after being played in by Stanislas.