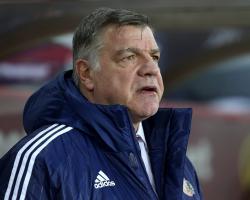 The relegation-threatened Black Cats head to Arsenal in the FA Cup this weekend, with Allardyce promising to make changes to his side ahead of a crucial Premier League clash at Swansea on Wednesday.

"If the Premier League decides to put a stupid fixture midweek when they don't bloody need to, then I haven't got much choice," he told a number of national newspapers.

Sunderland remain in the relegation zone despite Saturday's win over Aston Villa, with the trip to Swansea - two points and places above them - a significant one.

Allardyce has been further angered by that game being moved back from Tuesday to Wednesday at Swansea's request, giving Sunderland a slim turnaround before a lunchtime appointment with Tottenham on Saturday.

"It's diabolical," he added

"If you want us to respect the FA Cup, don't put Premier League fixtures in the midweek just after new year.

"Don't give me stick when I change the side at Arsenal

Give the Premier League stick, not the managers.

"It's a game to be enjoyed, not a game to be destroyed and we destroy the game by asking the players to do too much in this period."

Swansea have offered to cover the costs of the Sunderland fans who had already booked to travel on the Tuesday, but Allardyce said: "The Premier League told the fans they'll get their expenses back

"I'm concerned with the fans who have booked their travel up and spent their money; will they get all of that back or won't they?"