Sam Allardyce warns Sunderland ahead of biggest game of season 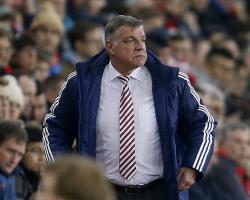 Allardyce admitted earlier this week that the Black Cats will be in desperate trouble if the gap between the number of Barclays Premier League games played and points gained reaches double figures, and that watershed could be perilously close if they do not beat fellow strugglers Aston Villa at the Stadium of Light on Saturday.

Sunderland are currently four points better off than bottom-of-the-table Villa, but seven shy of safety having taken just 12 from their opening 19 games, and their manager knows the point of no return is fast approaching after successive defeats by Arsenal, Watford, Chelsea, Manchester City and Liverpool.

"We failed miserably because that would have got us to 15 points with 16 games gone and we haven't won a point since then, so it's even bigger this one now than Watford.

"That's why we must hold our nerve

The fans were excellent on Wednesday night and hopefully they will be just as encouraging as they were with the players on Saturday to try to help us win."

Allardyce believes that averaging a point a game over the course of the season will be enough to keep the club in the top flight, but they are currently some way off that.

Nevertheless, he is confident they can put that right over the second half of the campaign.

The 61-year-old said: "I wouldn't be here if I thought that

I might as well go home and pack my bags now.

Well, all the top boys are slipping up, aren't they, so all the points will go somewhere else

The top four or five are not achieving as many points as they normally do.

"Whether that lies in the middle of the table rather than the bottom, we will have to wait and see

But certainly by the end of February, the beginning of March, we will have a better idea."

Allardyce has doubts over central defenders John O'Shea and Sebastian Coates, who have a calf problem and a dead leg respectively, while midfielder Jack Rodwell is out with a hamstring injury.