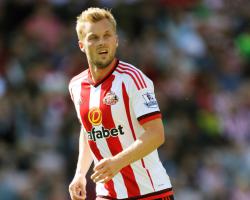 On a day when victory would have lifted them out of the bottom three, the Black Cats handed the visitors a 3-0 lead at the Stadium of Light inside a disastrous 34 minutes to leave themselves with a mountain to climb and little chance of reaching the summit, eventually succumbing 3-1.

Asked for his assessment, Larsson told SAFSee: "Not good enough, it's as simple as that

You lose a home game when we thought we had a good chance of three points.

"We spoke again about having an opportunity to get out of the bottom three and we really slammed the door in our own faces early on and really handed Stoke the game.

"It was not good enough."

For all Stoke were worthy winners, they did not have to work very hard for their decisive early advantage as Sunderland threw open the gates in alarming fashion.

The home side slept as Xherdan Shaqiri floated a long cross-field ball into the run of Marko Arnautovic, who controlled it perfectly and after Vito Mannone had blocked his initial effort, thumped home the rebound to give the Potters a 15th-minute lead.

The Austria international doubled his tally within seven minutes when, with the help of one-twos with first Shaqiri and then striker Peter Crouch, he waltzed through a statuesque defence to beat Mannone once again.

If the Italian was not helped by his team-mates for the first two goals, the third was all his own work as he hesitated when coming for Charlie Adam's cross and allowed Crouch to climb high above him and head his 99th Premier League goal and his 50th in a Stoke shirt.

Jermain Defoe dragged Sunderland back into contention five minutes before the break with his 12th goal of the season, but although the home side made a better fist of it after the break, it was all too little too late.

They dropped to 19th place as a result, although stunned manager David Moyes can at least console himself with the fact they remain just a single point from safety.

Moyes' options have been drastically reduced in recent weeks by injuries and African Nations Cup call-ups, and there is little prospect of him being able to strengthen his squad substantially during the January transfer window.

However, he said: "I don't want to stand here and say it's because of injuries or because of lack of numbers, I'm not going to do that.

"Other people can do it, but I think my job is to support the players who are on the pitch - I always will."

Stoke counterpart Mark Hughes was understandably far happier after seeing his side win at the Stadium of Light for the first time.

He said: "We disappointed ourselves last weekend in the cup and I needed a response

In fairness, they didn't surprise me because I have got an honest group, a group that will react when they have had disappointments and disappointed people.

"It was exactly what I expected to happen, in fairness

We haven't got a great record here, so it's always a difficult place for us to come, but thankfully we were able to get the job done.

"Arguably the first 30, 35 minutes was the best we have played away from home for a number of seasons in my memory, so to be able to hit that level after disappointing last weekend was really important for us."