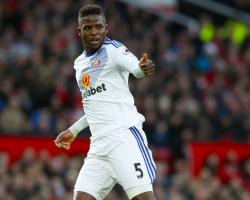 Press Association Sport understands that the 28-year-old Senegal international will plead his case before an independent regulatory commission hearing, the date for which has yet to be set.

Djilobodji had until 6pm on Monday to respond to the charge, which relates to an incident involving West Brom skipper Darren Fletcher during Saturday's 2-0 Premier League defeat at the Hawthorns.

Should the central defender fail to persuade the commission of his innocence, he faces a four-game ban having been sent off against Hull for two bookable offences earlier in the season.

Match referee Craig Pawson did not see Saturday's incident, but Djilobodji was later charged with the help of video evidence.

Manager David Moyes will hope his ÃÂ£8million summer signing from Chelsea is successful as he attempts to guide a squad already severely depleted by injuries and international call-ups out of relegation trouble.

Djilobodji has endured a difficult first few months on Wearside, where his form has been decidedly mixed, although Lamine Kone's departure for the African Nations Cup left Moyes with few options at the back.

Kone could return soon following Ivory Coast's exit from the competition, but the loss of one of only three specialist central defenders - John O'Shea is the other with the Sunderland boss having preferred largely to play loan signing Jason Denayer in a defensive midfield role - would come as a blow especially if it is for an extended period.

In addition, the club remains in talks with Crystal Palace over full-back Patrick van Aanholt, although as yet, no deal is in place