Sunderland Fans Float Back To Wearside!

The former United man praised Wednesday night's penalty shoot-out victory, which saw the Black Cats set up a Capital One Cup final with Manchester City at Wembley on March 2.

The 32 year-old said that Gus Poyet gave them the belief to come out victorious in the shoot-out.

O'Shea told the Newcastle Evening Chronicle: "It's up there, it's got to be. I was in the shower afterwards, thinking 'what has just happened?'

"Hopefully there will be one or two more nights like this, for the fans to witness that occasion was amazing. You can imagine the emotions we had, but for those that travelled down, they must have floated back to the North East. 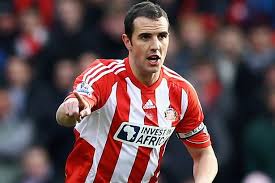 "We thought that was it; it was done when Phil Bardsley scored, it was so emotionally draining after Untied scored that second goal with 10 seconds to go, but the courage the boys showed was amazing.

"The manager spoke to us before the penalties and he said 'Believe, where you put the ball and Vito will save a couple, when Vito saved the last penalty, we were jumping around everywhere and it was incredible stuff."