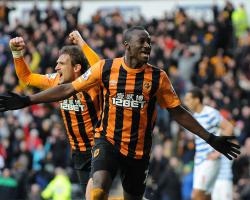 The 30-year-old has Barclays Premier League experience having played for Hull last season, scoring five goals in 15 appearances before moving to Turkey in August.

"Having already played in the Premier League, he should have no problems in hitting the ground running, too, which is very important at this stage of the season."

After spells with Academica in Portugal and Greek sides Panathinaikos and OFI Crete, N'Doye enjoyed the most prolific spell of his career at FC Copenhagen, scoring 59 goals in 104 appearances.

His stint in Denmark ended in 2012 when he joined Lokomotiv Moscow, and his form there earned him a move to Hull.

N'Doye made an immediate impact with three goals in his first four games and also scored a double against Crystal Palace but finished last season on a five-match winless run as Hull were relegated.

He spent pre-season with Hull but left after Trabzonspor met his release clause of ÃÂ£2.2million, which was ÃÂ£800,000 less than the Tigers paid for him.

N'Doye, who will wear the number 10 shirt for Sunderland, has been a regular for Senegal since making his debut in 2010 and played in last year's African Nations Cup.

He will not be available for Saturday's trip to Tottenham because formalities pertaining to his work visa still need to be completed.