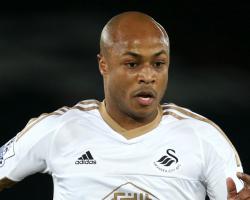 The Black Cats first registered their interest in the 26-year-old Ghana international earlier this month, but were swiftly rebuffed with the Swans insisting their summer signing was simply not for sale.

Sources on Wearside on Tuesday played down suggestions that the club has returned with an offer of ÃÂ£10million plus Italian striker Fabio Borini, although Press Association Sport understands there has been further contact and that their interest is firm and ongoing.

It remains to be seen whether or not the Welsh outfit is prepared to do business after all with new boss Francesco Guidolin, a compatriot of Borini, having presided over victory in his first game at Everton on Sunday to boost hopes of avoiding the drop.

Former Marseille man Ayew scored the decisive goal in that game, his eighth of the season, while Borini, who joined the Black Cats for a fee which could eventually rise to ÃÂ£10million from Liverpool last summer, has managed just two to date.

Just how a deal which involved the two crossing paths would go down in south Wales is a matter for some contention with Swansea having already sold midfielder Jonjo Shelvey to fellow relegation candidates Newcastle for ÃÂ£12million.

Allardyce has signalled his intention to bring in a defender and an attacking player during the remaining days of the transfer window having already signed Bayern Munich defender Jan Kirchhoff and Trabzonspor striker Dame N'Doye, and he was on the continent on Sunday looking at potential targets.

However, it is understood he has no interest in Stoke striker Peter Odemwingie amid suggestions that he could be on his way to the Stadium of Light.

Meanwhile, a Sunderland XI will entertain a Newcastle XI behind closed doors at the Stadium of Light later this week as Allardyce and opposite number Steve McClaren give some of their fringe players and senior men who are short of match fitness a chance to get game-time under their belts.

Eyebrows have been raised at the plan, although neither club has a fixture this weekend with both having gone out of the FA Cup at the first attempt.