Sunderland's Biggest Win Of The Season?

Adam Johnson continued his mission to single-handedly fire Sunderland to Barclays Premier League safety as 10-man Stoke were dragged back into the mix.

The £10million England midfielder's sixth goal in as many games secured a 1-0 win - the Black Cats' first in the league in six attempts at the Stadium of Light - and in the process eased them out of the relegation zone for the first time since August. 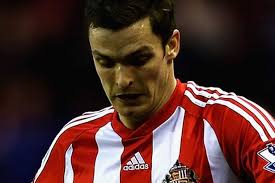 Johnson struck from close range with 17 minutes gone after Potters keeper Asmir Begovic had spilled Fabio Borini's effort, to the delight of the bulk of a crowd of 34,745.

Stoke, who handed a debut to new signing Peter Odemwingie, were simply not in the game during the opening stages and found themselves defending for dear life.

However, they gradually eased their way into it and would have gone in at half-time level had Sunderland keeper Vito Mannone not pulled off a stunning 39th-minute save to keep out Ryan Shawcross' point-blank header.

But their hopes of mounting a fightback were dealt a fatal blow within eight minutes of the restart when midfielder Steven Nzonzi was sent off for a second bookable offence, although Shawcross looped a header against the bar with six minutes remaining.

Stoke manager Mark Hughes, who saw Glenn Whelan and Marc Wilson dismissed in a 5-1 drubbing at Newcastle on Boxing Day, was less than impressed by referee Robert Madley's decision, but his protests counted for nothing.

Gus Poyet's men have now lost just two of their last 13 games, and will head into Saturday's derby trip to Newcastle brimming with confidence.

By contrast, Stoke have now gone six league games without a win and have been dragged firmly into the fight for survival.

Lee Cattermole's absence from the 18 caused raised eyebrows on Wearside after days of speculation that he is a transfer target for Stoke, although injury was later cited as the cause.

Only he and Steven Fletcher of the men who had started the Capital One Cup semi-final at Old Trafford a week earlier were missing as the Black Cats went in search of a first league victory at the Stadium of Light since November 10.

Poyet had demanded a much better start that the one he saw in their last outing, when his side trailed 2-0 to Southampton within 31 minutes, and he got it as his players took the game to the Potters from the off.

Less than seven minutes had elapsed when midfield Sebastian Larsson warmed Begovic's hands from distance after Jozy Altidore and Borini had linked well.

Mannone had to pluck Oussama Assaidi's deflected cross from under his crossbar three minutes later, but it was the home side who dominated the opening stages with full-back Phil Bardsley sending a looping shot tamely over the bar and then blasting a 15th-minute volley just wide of the far post.

They got their reward two minutes later when Begovic failed to hold Borini's well-struck shot and Johnson pounced on the rebound before rounding him and sliding the ball home from an acute angle.

With Altidore far more effective in holding the ball up than in recent weeks, the Black Cats pinned Stoke back, and it was not until Odemwingie was shifted from the right side of midfield into closer contact with lone striker Peter Crouch that the visitors found their feet.

Charlie Adam almost caught Mannone out with a rasping strike which flew just wide of the far post, and the Italian very nearly handed Crouch an open goal when he spilled defender Geoff Cameron's cross as he collided with team-mate John O'Shea, but recovered in time to make a vital block.

Cameron headed wastefully over after Adam's 37th-minute corner had been helped on to him beyond the far post, and the Scotland international was the provider once again six minutes before the break.

He picked out Shawcross unmarked outside the six-yard box with a driven cross, but Mannone somehow kept out the central defender's bullet header with Sunderland in disarray.

However, Stoke were dealt a major blow eight minutes into the second half when Nzonzi was adjudged to have felled Altidore and having been booked before the break for a foul on the same man, he was dismissed.

The United States international could have effectively finished the game as a contest when he ran through unopposed, but was denied by Begovic's legs three minutes later.

Johnson fizzed a shot across the face of goal and Larsson tested the keeper from distance once again as the Black Cats tried to kill the game off.

But Odemwingie had a glorious opportunity to level 16 minutes from time when he slipped the ball between Wes Brown's legs, but then shot straight at Mannone, and Shawcross was denied by the woodwork amid a late desperate flurry.