In a season of utter misery for United boss David Moyes, it was yet another hammer blow.

Let's face it - the United job is just TOO BIG for the Jock, and no matter what the directors say at Old Trafford - the fans will decide how long he stays in the job. 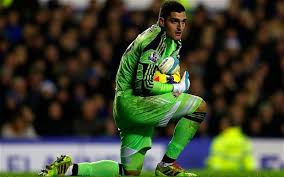 Earlier, former Sunderland loanee Jonny Evans had sent the game to extra-time when he brought Man United level on aggregate when he headed home from a corner.

United would have won on away goals at the end of the additional 30 minutes if Sunderland hadn’t scored, but with just a minute to go, Phil Bardsley’s shot was spilled horribly into his own net by David De Gea.

Sunderland’s ecstasy was short-lived though as in the final seconds of extra-time, Javier Hernandez sent it to penalties when he levelled.

The penalties were in front of the Sunderland fans, but the Black Cats got off to the worst possible start as Craig Gardner blasted his spot-kick over the top.

But ex--Sunderland loanee Danny Welbeck then followed suit as he skied his spot-kick too.

Steven Fletcher then missed too, as his soft effort was stopped by De Gea low to his right.

Namesake Darren Fletcher became the first player to score as he tucked his penalty away in the same corner.

Marcos Alonso was the first Sunderland player to net as he drilled it down the middle.

It remained 1-1, with Januzaj’s tame effort saved well by Mannone.

Ki Sung-Yueng then gave Sunderland the lead as he sent De Gea the wrong way.

Phil Jones then skied his spot-kick, leaving Johnson the task of sending Sunderland through to Wembley.

But his effort down the middle was beaten away by De Gea.

That still left Rafael needing to score, but his effort down the middle was saved by Mannone to send Sunderland through to Wembley.