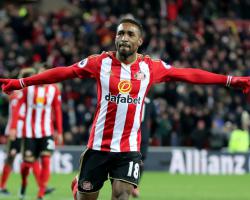 Tom Heaton denied Sunderland a dramatic late winner as David Moyes' men were left mired in relegation trouble after spurning a series of chances against Burnley at the Stadium of Light.

Heaton saved well from Fabio Borini in the 87th minute while Billy Jones and Sebastian Larsson also missed fine opportunities as the Clarets recorded only their third away point of the season.

Burnley themselves will be disappointed not to go home with the points with Ashley Barnes prodding their best chance wide in the first period and substitute Sam Vokes coming close late on.

Barnes' miss was the only memorable moment of a grim first period, the ball spinning wide of keeper Jordan Pickford's right-hand post after Scott Arfield's low ball into the box beat the offside trap.

The Clarets had looked more lively from the first whistle, with Jason Denayer producing a vital interception to deny George Boyd a shot on goal, then Pickford racing from his goal to meet an Andre Gray through-ball.

Boyd was inches from connecting with Stephen Ward's ball across the face of goal in the 11th minute and as the hosts huffed and puffed it did not take long for frustration levels to mount amongst the home supporters.

It took half an hour for Sunderland to summon a shot on target against the side with the worst away record in the division, when Jack Rodwell's header was easily saved by Heaton.

Darron Gibson blazed over after Adnan Januzaj cut back his corner, before Barnes' glaring miss ensured the deadlock would continue heading into the break.

Sunderland looked better at the start of the second period and could have grabbed the lead in the 48th minute when Borini burst clear on the left flank but hit a tame shot at Heaton.

Moments later the Black Cats had two even better chances in quick succession, Heaton reacting brilliantly to block a bouncing shot from Januzaj at point-blank range before the same player swung in a cross from which Sebastian Larsson spooned wide.

Burnley had a strong penalty shout denied when Barnes tumbled in the box in the 63rd minute and moments later the hosts wasted an even better chance when Jones met Larsson's right-wing cross with a diving header but steered his shot wide of target.

Burnley substitute Robbie Brady hit a speculative effort straight at Pickford but it was the hosts who finished strongest, boosted by fresh legs of Didier Ndong and Wahbi Khazri, as the Clarets sat deep and invited pressure.

Vokes drilled a shot straight at Pickford from a tight angle but there was almost a late twist when the ball dropped to Borini in the left side of the box but he drilled his low shot straight at Heaton.