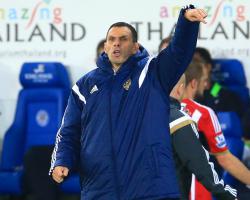 Sunderland 0-0 Chelsea: Match Report - view commentary, squad, and statistics of the game as it happened.Chelsea draw a rare blankWillian and Santiago Vergini both hit the woodwork as Sunderland extended their run of good results against Chelsea with a 0-0 draw.The Black Cats, who were looking for a third successive victory over Jose Mourinho's men inside 12 months, withstood periods of pressure.But in front of a crowd of 45,232 at the Stadium of Light, Sunderland were not unduly stretched by the Barclays Premier League leaders.Willian struck the foot of the post and Vergini clipped the crossbar in a tight first half, but apart from on those occasions neither Costel Pantilimon nor Thibaut Courtois was overextended, with the Romanian's block from Branislav Ivanovic the only troublesome save either had to make.It proved a disappointing afternoon for the visitors, who failed to score for the first time this season, and striker Diego Costa was in danger of allowing it to get the better of him, appearing to kick out at defender John O'Shea and then catching Wes Brown with his arm in an aerial challenge, an offence which earned him a fifth booking of the campaign.Chelsea arrived on Wearside having started the season with an unbeaten run of 19 games and hot favourites to extend it with a victory, although they were largely frustrated during a first half featuring plenty of combative action.Sunderland, defending a more modest sequence of three games without defeat, sat deep when out of possession and although that policy invited pressure, they dealt relatively comfortably with what the visitors were able to throw at them.The approach allowed Gus Poyet's men to hit the Blues on the break, and they did that to good effect twice within the opening nine minutes with Connor Wickham, once again starting wide on the left side of midfield, forcing a block from an uncharacteristically flustered Ivanovic and then firing over from long distance.Chelsea started to exert concerted pressure as the half progressed, with Oscar forcing Pantilimon into a 13th-minute save, although one with little degree of difficulty, before he tipped Willian's 17th-minute strike on to the foot of the post.It took a superbly-timed 23rd-minute challenge by O'Shea to deny Costa a clear run at goal from Cesc Fabregas' defence-splitting 23rd-minute pass, but Jack Rodwell tested Courtois for the first time with an effort from distance two minutes later.Eden Hazard saw a well-struck 27th-minute shot blocked by the impressive Lee Cattermole with the game warming up.Referee Kevin Friend did not endear himself to the locals with a series of decisions which did not go their side's way, and assistant boss Mauricio Taricco was sent from the bench on the half-hour mark after fourth official Lee Mason drew the senior official's attention to his protestations.The visitors might have been ahead seconds later when Ivanovic got in on the right only to see his strike blocked by Pantilimon's foot, and the Black Cats very nearly took the lead when Cattermole's deflected 34th-minute cross fell nicely for full-back Vergini, whose snapshot clipped the crossbar.As the whistle approached, the game became increasingly tetchy and Costa was fortunate to escape further punishment when he appeared to kick-out at O'Shea after a tussle on halfway.Central defender Gary Cahill headed straight at Pantilimon from Willian's 49th-minute corner

Brazilian Brazilian flashed a fierce left-footed strike just wide two minutes later with Sunderland pinned back once again.Costa incurred punishment from referee Friend after catching Brown with a flailing arm, although the home fans were unimpressed by the referee's decision to issue a yellow, rather than a red card, one which means he will miss Wednesday's clash with Tottenham.Poyet replaced Rodwell and lone striker Steven Fletcher with Jordi Gomez and Jozy Altidore with 28 minutes remaining, and United States international Altidore was only just denied a header at goal by Cahill from Larsson's inviting cross.Nemanja Matic fired straight at Pantilimon with 68 minutes gone, but it was Courtois who had to be alert to pluck Wickham's rasping drive out of the air at the second attempt with 18 minutes left on the clock.Mourinho took off Oscar and Costa to send on Didier Drogba and Loic Remy with 76 minutes played, and Ivorian Drogba forced a diving save from Pantilimon within seconds.But in a strong finish by the home side, Altidore saw a shot blocked amid a goalmouth scramble and then another effort dropped to Adam Johnson, who scuffed his effort harmlessly

Johnson blasted inches wide with three minutes left, with Sunderland then grateful late on when Drogba headed off target