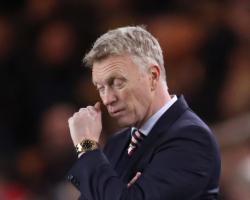 Sunderland down after defeat to Bournemouth

Sunderland's 10-year stay in the Premier League was ended as Josh King's late winner for Bournemouth confirmed their relegation.

King struck with two minutes remaining at the Stadium of Light to snatch a 1-0 win which finally ended the Black Cats' hopes of a fifth successive great escape.

There was brief hope from elsewhere as Southampton were awarded a penalty against Hull but Eldin Jakupovic's save earned the TIgers a goalless draw which leaves them 13 points clear of David Moyes' side, who have only 12 to play for.

King had earlier been denied by the woodwork but Jermain Defoe uncharacteristically passed up a series of inviting opportunities for the home side and sections of the 38,394 crowd at the Stadium of Light once again called for Moyes' head on the final whistle.

On an afternoon when the Black Cats, who on Friday reported losses of B#33million after tax for the year to July 31, ran out knowing the price of failure only too well, they huffed and puffed during a nervy first half in which Bournemouth played the better football and came desperately close to taking the lead.

That said, they had chances and had leading scorer Defoe been able to call upon his early-season form - the last of his 14 goals came nine games ago - they might even have grabbed the lead.

Fabio Borini forced Artur Boruc into an 11th-minute save with a rising drive, but it was Defoe to whom most of the better openings fell.

He fired high over from a promising position with 19 minutes gone after exchanging passes with Wahbi Khazri and just wide six minutes before the break, having earlier seen his penalty appeals waved away by referee Stuart Attwell when his shot appeared to hit the arm of Simon Francis.

But in the meantime, Jordan Pickford, who made regulation saves from Benik Afobe, Marc Pugh and Adam Smith, enjoyed a rare moment of good fortune when King left him rooted to the spot with a 20th-minute chip from a tight angle only to see the ball hit both the bar and the post before bouncing into the keeper's arms.

Pugh was unable to trouble Pickford with a header from King's ball in seconds after the restart but fired just wide of the far post with 50 minutes gone, although Boruc had to palm away Borini's effort as play switched rapidly to the other end.

Central defender Lamine Kone headed over from Khazri's 55th-minute cross with the Black Cats pressing once again but as time ran down, any composure began to ebb away.

However, George Honeyman had the home fans off their seats when he latched on to Borini's 67th-minute pass and tested Boruc at his near post.

The game descended into an ugly melee after Borini brought down Lewis Cook with a clumsy challenge, and the Italian and Harry Arter were both booked for their roles in it once order had been restored.

Boruc needed two attempts to field full-back Donald Love's skidding low drive four minutes from time, but it was the visitors who snatched victory at the death

Substitute Lys Mousset picked out Ryan Fraser on the right and his cross was steered home by King.

Southampton's penalty was awarded at almost the same moment, but Jakupovic denied Dusan Tadic to condemn the Black Cats to life back in the Sky Bet Championship.