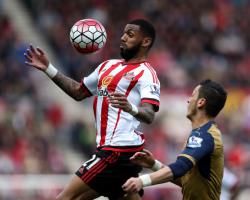 Cesc Fabregas' first Premier League goal of the season handed Chelsea victory at Sunderland and sent them six points clear at the top of the table.

Fabregas, making just his third league start of the season, struck in stylish fashion five minutes before the break to secure a second 1-0 win inside four days and their 10th success on the trot, although it took a superb stoppage-time save by Thibaut Courtois to deny Patrick van Aanholt a last-gasp equaliser.

Antonio Conte's men dominated for long periods in front of a crowd of 41,008 at the Stadium of Light, but could not kill off their hosts, who remain rooted at the bottom of the pile despite a spirited display.

Sunderland striker Jermain Defoe carried five-year-old mascot Bradley Lowery, whose fight against Neuroblastoma has captured the hearts of players, supporters and officials from clubs around the country, on to the pitch ahead of kick-off.

But as he and his team-mates got down to business, they attempted to counter Chelsea's 3-4-3 formation by asking Billy Jones and Van Aanholt to operate slightly in advance of Lamine Kone, John O'Shea and Papy Djilobodji, with Jan Kirchhoff and Jason Denayer providing a further layer of protection in midfield.

Perhaps unsurprisingly, the leaders struggled to break their hosts down despite enjoying a wealth of possession with Fabregas orchestrating from deep, and the opening 39 minutes passed largely without incident as the Black Cats soaked up pressure with little real difficulty.

However, the game exploded into life as the whistle approached with defender David Luiz forcing goalkeeper Jason Pickford into his first save with a deflected long-range free-kick, although the respite proved to be fleeting.

Seconds later Fabregas exchanged passes with Willian before curling a right-foot shot wide of Pickford's despairing dive to give the visitors a 40th-minute lead which they might have doubled in stoppage-time.

O'Shea upended Diego Costa, who had endured a frustrating evening until that point, on the edge of the penalty area and Willian curled the resulting free-kick inches wide with the travelling fans behind the goal convinced it had gone in as the ball rustled the side-netting.

Sunderland would have been back in it within two minutes of the restart had it not been for the excellence of Courtois, who denied Adnan Januzaj one-on-one after he had been played in by Defoe, a timely warning that the game was far from over.

Pickford needed the help of the crossbar when Willian's 51st-minute shot clipped Djilobodji and wrong-footed him, although he got down well two minutes later to parry Costa's well-struck effort.

David Moyes' men continued to scrap for a way back into the game and Fabio Borini, making his first appearance since August, skied a 57th-minute shot high over, but Victor Moses went significantly closer at the other end on the hour after cutting inside substitute Sebastian Larsson.

Chelsea looked to have eased their way to the points, but Courtois had to be at his best to claw Van Aanholt's 93rd-minute piledriver to safety.