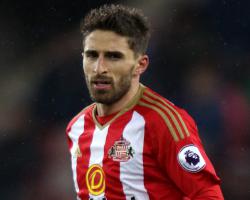 Sergio Aguero struck for the fifth time in three games as Manchester City eased past relegation-haunted Sunderland and back into third place in the Premier League.

Aguero's 42nd-minute strike handed City the lead and Leroy Sane added a second after the break to secure a 2-0 victory on a day when Pep Guardiola's men were made to work harder than they might have anticipated to claim the points.

The win - their seventh in eight games in all competitions - leaves them eight points adrift of leaders Chelsea ahead of Wednesday night's home clash with Stoke.

By contrast Sunderland, who have taken maximum points from just one of their last 10 league fixtures, remain rooted to the foot of the table, although manager David Moyes may take a crumb of comfort from the fact that they more than matched City until the opening goal.

They ran out knowing they were deep in trouble after wins for Crystal Palace, Swansea and Leicester on Saturday had left them six points adrift of safety with just 12 games to go.

Few would have given them much chance of addressing that situation against high-flying City despite the visitors' recent discomfort at the Stadium of Light, where they had lost on four successive occasions before the last two seasons.

However, it was the Black Cats who enjoyed the better of the first half and they could have been forgiven for feeling aggrieved as they left the pitch at the break.

Had they enjoyed better fortune, Jermain Defoe's 20th-minute shot on the turn from Fabio Borini's astute pass might have gone in off the post rather than cannoned back off it, and the Italian might have been able to adjust quickly enough to head the rebound on target.

Full-back Billy Jones too could have made the breakthrough, but he headed a 36th-minute Adnan Januzaj corner straight at goalkeeper Willy Caballero and glanced another from Sebastian Larsson just wide three minutes later.

City had not managed a single effort on target by the time the clock ticked around to the 42nd minute, but it was then that they flexed their muscles.

Yaya Toure and David Silva combined to play Raheem Sterling into space down the right and his low cross clipped full-back Bryan Oviedo and allowed Aguero to lift the ball expertly over keeper Jordan Pickford at his near post.

Silva saw a 57th-minute left-foot strike beaten away by Pickford and Lamine Kone blocked Aguero's attempt seconds later, but it was Sane who eased the visitors further ahead with 59 minutes gone.

The German did not have to break stride as he ran on to Silva's perfectly-weighted pass and his left-foot finish off the inside of the far post was equally assured.

Caballero preserved his side's lead on the hour when he blocked Larsson's driven shot from a tight angle with a foot and Defoe had a late effort ruled out for offside, but only a fine save from Pickford denied Aguero a second late on.