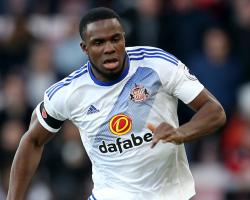 Sunderland's survival hopes look bleaker than ever after Manchester United strolled to a 3-0 victory that gives Jose Mourinho's men a timely shot in the arm.

A lot was riding on Sunday's Stadium of Light encounter, with United needing to kick-start their top-four hopes against a side for whom anything but victory would only push them closer to the precipice.

Manager David Moyes may well feel aggrieved by Seb Larsson's first-half red card but Sunderland were already behind to a ferocious Zlatan Ibrahimovic strike by that point, with second-half Henrikh Mkhitaryan and Marcus Rashford goals seeing United cruise to a win.

It appears a case of when rather than if the Black Cats' decade-long Premier League stay comes to an end, having failed to score in a seventh straight match.

Sunderland have seven matches to make up a 10-point deficit after Moyes - whose threat to 'slap' a female reporter is being looked at by the Football Association - saw his former club go ahead through a fine Ibrahimovic strike.

The hosts may well feel hard done by after Eric Bailly avoided giving away a penalty shortly before Larsson's harsh-looking sending off, with a frustrating end to the first half compounded within seconds of the restart.

Mkhitaryan put the game to bed with a low strike before Rashford's first Premier League goal since September 24 wrapped up a win that moves United within four points of a Champions League berth.

Divisive midfielder Maroaune Fellaini captained Mourinho's side on Wearside in the absence of seven first-team regulars, but strength in depth meant such absentees were not problematic against the league's bottom side.

Jesse Lingard was denied early on by Jordan Pickford as Sunderland sat off, giving United space the recalled Luke Shaw gobbled up as he made a bright start.

Dead balls looked Sunderland's best hope so Bryan Oviedo's tame free-kick from a decent position was wasteful, with the first real test for Sergio Romero - filling in for the injured David De Gea - when Lee Cattermole took aim from distance.

Jermain Defoe, unaware he had strayed offside, turned wide as Sunderland fans started to believe - hope snatched away in the 30th minute.

Having done well to stop Lingard shortly before, Pickford could not prevent Ibrahimovic's fierce effort finding the net after the veteran collected a pass and turned all too easily.

Fellaini almost bundled in a driven Shaw cross as United pushed for another, with Sunderland's chances of a shock comeback ended by an action-packed end to the first half.

Having regrouped after Oviedo's game-ending injury, Victor Anichebe nearly levelled after turning to get away a close-range shot impressively blocked by Romero.

Bailly was fortunate not to give away a penalty for kicking out at the Sunderland striker and referee Craig Pawson irked the hosts further just before the break.

Larsson's high tackle on Herrera deservedly brought a free-kick but the straight red card puzzled onlookers and infuriated the midfielder, leaving Moyes as perplexed as he was frustrated.

Half-time brought a chance to regroup, but within seconds of the restart United were further ahead.

Mkhitaryan controlled a pass from Shaw and was allowed time and space to get away a low, driven strike out of Pickford's reach from an acute angle.

United took their foot off the gas with the match all but won and Thursday's Europa League quarter-final at Anderlecht looming large, with Defoe leading the hosts' attempts to reduce the deficit.

The veteran saw a free-kick saved and effort fly over either side of a wild Paul Pogba attempt, before substitute Anthony Martial clipped over.

Pogba came close with a free-kick and Defoe faltered at the near post as the home support streamed out, missing Rashford's return to the scoresheet.

The 19-year-old made such an astonishing England debut at the Stadium of Light and scored here again, striking low past Pickford late on.