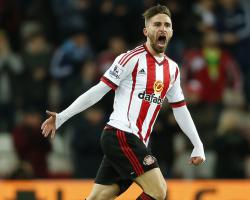 Patrick van Aanholt ended a bad week in style by ensuring Sunderland will not spend Christmas at the bottom of the Premier League when he fired them to victory over Watford.

The Dutchman, who has been banned from driving for speeding, tucked home what proved to be a 49th-minute winner, his third goal of the season, to secure three precious points at the Stadium of Light.

After an indifferent first half, Black Cats boss David Moyes, who this week learned he will have little or no cash to spend during the January transfer window, saw his team finally get going to secure a fourth league win in seven games.

In a poor first 45 minutes, Sunderland rarely looked like putting the visitors under the kind of pressure which had done for Hull and Leicester in their most recent home victories.

Where Troy Deeney and Odion Ighalo were a constant threat for the visitors, Jermain Defoe was fatally isolated for long periods at the pinnacle of a 4-2-3-1 formation, and it was Watford who created the clearer openings before the break.

Keeper Jordan Pickford has been in excellent form for the Black Cats in recent weeks, and he had to be at his best once again when Nordin Amrabat unleashed a fierce volley from Etienne Capoue's second-minute corner.

Ighalo might have opened the scoring from Jose Holebas' driven 15th-minute cross, but could not make meaningful contact at the near post, and defender Miguel Britos was left with his head in his hands after failing to hit the target from another Holebas cross 11 minutes later.

Sebastian Prodl did call upon Pickford on the half-hour, but his header was straight at the keeper, and it took a fine covering tackle from Didier Ndong to prevent Juan Zuniga from converting Ighalo's cross two minutes later.

Sunderland manufactured little of note until late in the half when Victor Anichebe played in Van Aanholt and his shot from a tight angle was repelled by keeper Heurelho Gomes.

But Gomes was left helpless within four minutes of the restart when Adnan Januzaj picked out Defoe's run and the striker crossed for the supporting Van Aanholt to turn Kabasele and fire home off the inside of the far post.

Defoe himself shot over from distance two minutes later with the Black Cats visibly growing in confidence, but they slept to allow Capoue and Amrabat to combine from a 59th-minute corner once again, although this time the latter's shot flew high over.

However, Anichebe, back in the side after a thigh injury, came within inches of a second goal when he drilled a 62nd-minute effort just wide after Donald Love had crossed from Januzaj's cheeky back-heeled pass.

Deeney passed up an opportunity to finally complete a century of goals for the Hornets with a 73rd-minuite diving header, but it took a double-save from Pickford to prevent substitute Daryl Janmaat and then Ighalo from snatching a late equaliser.