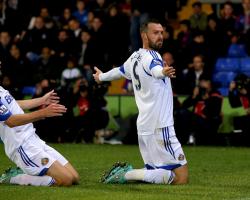 It came nine minutes after Sebastian Larsson had fired the Black Cats ahead with a superb free-kick, his first league strike from a set-piece since December 2011.Wickham and his team-mates, as well as the home fans among a crowd of 43,476 at the Stadium of Light, were incensed at referee Lee Mason's decision to award a penalty, although replays suggested they had little cause to be.A tight contest remained in the balance until the final whistle, with keepers Pantilimon and Tim Howard both producing important saves before the goals started to go in, although James McCarthy's injury-time clearance denied Wes Brown a last-gasp winner.Sunderland were more than value for a point, but Everton, who had midfielder Gareth Barry carried off with what looked like a serious injury early in the first half, would have felt aggrieved if they had left empty-handed after a full-blooded encounter.The Wearside club paid their own Remembrance Day tribute before kick-off by inviting more than 2,000 military personnel, representatives of veterans' groups and families of those killed on active service to the game, and the locals among them would have been delighted with much of what they saw in the opening 45 minutes.Gus Poyet's men looked rejuvenated by their 3-1 victory at Crystal Palace on Monday and, while Everton, a club with loftier ambitions for the season, enjoyed more than their fair share of possession before the break, the Black Cats created just as promising many openings as the visitors.They might have taken the lead twice within the opening six minutes in similar circumstances, with Wickham glancing a header from a Larsson corner just wide of the far post and then powering another on to the roof of the net from the same source.Everton, for whom Ross Barkley tested Pantilimon with a shot from distance seconds after Wickham's second near miss, were forced to make an early change when Barry left the field on a stretcher after being caught by Jordi Gomez in a seemingly innocuous challenge.Gomez, who was booked for the tackle with Barry, was fortunate to survive after going to ground on the edge of the area as he lunged towards Phil Jagielka.Clear-cut chances were few and far between until the half entered its final 15 minutes, with play switching rapidly from end to end.Sylvain Distin distinguished himself with a vital clearance after Gomez had played in full-back Anthony Reveillere down the left to cross, but holding midfielder Liam Bridcutt had to produce a fine block to deny Barkley after the England man had raced half the length of the pitch and exchanged passes with Aiden McGeady before going for goal.But Sunderland produced their best opening of the half seconds later when Howard blocked Gomez's shot with his legs after another incisive attack.Everton returned from the break in determined mood and went close twice within seconds when first Pantilimon claimed Barkley's curling shot and then denied Romelu Lukaku one on one after he had run on to Bridcutt's woefully under-hit back pass.The Romanian had to be even more resilient with 56 minutes gone when, after Wickham had been robbed by McCarthy on halfway, the Republic of Ireland international combined with Samuel Eto'o to find Lukaku on the left

The Belgian stepped inside full-back Santiago Vergini to blast in a shot which Pantilimon somehow managed to turn on to a post.Sunderland's keeper was grateful to see Lukaku's header drop nicely for him seven minutes later when the striker connected with Baines' cross after substitute Darron Gibson had got the better of Vergini in a 50-50 challenge.But it was opposite number Howard who was picking the ball out of his net with 67 minutes played when, after Baines had been penalised for a foul on substitute Will Buckley, Larsson curled a fine free-kick over the wall and into the far corner.However, the lead last just nine minutes

Coleman was felled inside the area by Wickham and Baines remained calm as the home side remonstrated with Mason before slotting past Pantilimon from the spot, although in less convincing fashion than that to which his team-mates have become accustomed.Brown was denied an injury-time winner when McCarthy hacked his header from Bridcutt's cross off the line with Howard beaten as the visitors managed to hang on