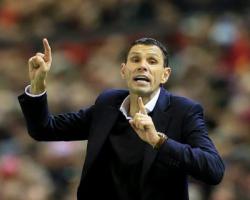 Bolasie treble sinks SunderlandYannick Bolasie plundered an 11-minute hat-trick as Crystal Palace boss Alan Pardew got his own back on Sunderland.The DR Congo international struck after 51, 54 and 62 minutes after Glenn Murray had opened the scoring to hand the former Newcastle manager a 4-1 victory at the Stadium of Light, Palace's first ever top-flight win on Wearside

Connor Wickham scored the home side's consolation.Pardew, of course, presided over four successive defeats by the Black Cats during his spell in charge at St James' Park, and that run was a major factor in the deterioration of his relationship with the Toon Army.Victory took the Eagles through the 40-point barrier - 25 of their 42 have come in the 12 Barclays Premier League games since he took charge.By contrast Sunderland, who went into the game brimming with confidence following last Sunday's derby success over Newcastle, find themselves back in the relegation mire after conceding four times at home for the second time in three attempts.They have made a habit of allowing the momentum of a derby victory to slip away in recent seasons with their previous three wins over Newcastle being followed by defeat in the game immediately afterwards, remarkably on each previous occasion at the hands of Hull.That had not been lost on head coach Dick Advocaat in the run-up to the game, but knowing about the situation and being able to do something about it are different things, and so it proved.The Black Cats were simply unable to reproduce the intensity they had summoned up last Sunday apart from an early flurry, and although strikers Wickham and Steven Fletcher were again prominent, along with returning midfielder Jack Rodwell, there was little to recommend in the opening 45 minutes.Palace had set up to concede little and after starting on the back foot, gradually worked their way into the game, disrupting Sunderland effectively and trying to hit them on the break with Bolasie and Wilfried Zaha threatening from wide positions.Chances were few and far between with Fletcher unable to direct Jordi Gomez's pacy fifth-minute corner on goal and Eagles skipper Mile Jedinak on his return from suspension firing a 13th-minute free-kick wastefully into the defensive wall.An increasingly physical game - Rodwell, Lee Cattermole and Scott Dann were all booked in quick succession with the former Everton and Manchester City man perhaps fortunate only to see yellow for a challenge on James McArthur - meandered rather than thundered towards the half-time whistle.There was, however, a lively finish with Fletcher and Zaha both teeing up late volleys, the first of which was saved easily by Julian Speroni and the second blocked by the vigilant Patrick van Aanholt.But the game was to take a decisive lurch in Palace's favour inside six minutes at the start of the second half as Sunderland simply imploded.The visitors broke the deadlock three minutes after the restart when Bolasie was allowed to turn wide on the right edge of the penalty area and he floated a cross to the far post, where Murray timed his run to perfection to head inside the far post.Advocaat was furious that an offside flag had not been raised, although replays confirmed the officials had got it right, and the Dutchman's misery had only just begun.Only three more minutes had elapsed when Murray rose to head a long ball down towards Bolasie who, after defender Santiago Vergini failed to cut it out, stabbed gleefully past the helpless Costel Pantilimon.The game was effectively over just nine minutes into the half when Bolasie easily out-muscled John O'Shea in pursuit of another ball over the top and lifted his shot over Pantilimon to spark an exodus from the stands.That grew in size within eight minutes when Murray got the better of O'Shea on the right and crossed for Bolasie, who slipped as he was confronted by Pantilimon, but still managed to stab the ball into the empty net to complete a quick-fire treble.It might have been even worse for the Black Cats had Pantilimon not clawed McArthur's 66th-minute effort away with his defence in tatters, and Wickham's 89th-minute strike prove scant consolation for what remained of a crowd of 42,073 despite Speroni tipping Van Aanholt's injury-time shot on to the bar