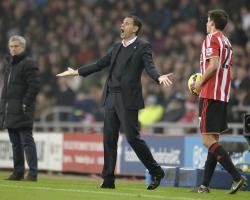 Sunderland 1-4 Man City: Match Report - view commentary, squad, and statistics of the game as it happened.Aguero at the double in City rompSergio Aguero turned on the magic once more as Manchester City maintained the pressure on Barclays Premier League leaders Chelsea by cruising to a 4-1 win over Sunderland at the Stadium of Light.Aguero rammed home his 18th goal of the season two minutes after Connor Wickham had given the hosts a shock early lead and scored again with 19 minutes remaining as City turned on the style to shatter a four-year hoodoo against the Black Cats.City had been downed by Sunderland 1-0 in each of their four previous league visits to the north-east and a repeat performance might have been on the cards when Wickham got a fortunate deflection off Pablo Zabaleta's attempted clearance to put his side in front.But Aguero quickly equalised, then played a delightful flick for Stevan Jovetic to put his side in front before the break - before second half strikes from Zabaleta and Aguero completed an impressive victory.City looked like they meant business from the start with Jesus Navas sending in a cross which eluded Aguero's outstretched boot by inches with less than four minutes on the clock.But utterly unfazed, the hosts sprang back within a minute when the recalled Will Buckley galloped into space on the right flank and crossed for former City man Jack Rodwell, who should have done better with two attempts which were both blocked by Zabaleta in the City box.Sunderland grabbed a shock lead in the 19th minute when Sebastian Larsson threaded the ball towards Wickham

Despite Zabaleta getting his foot on the ball first, he could only deflect it into the net off the England Under-21 striker's foot.But the lead lasted all of two minutes and Aguero's equaliser was as clinical as any of his previous 17 other goals this season as he ghosted past Black Cats debutant Sebastian Coates before lashing a rising effort past helpless home goalkeeper Costel Pantilimon.Clearly becalmed after their early scare, the visitors turned down the pace and dominated the midfield for long periods before one more moment of Aguero brilliance gave them the lead six minutes from half-time.Fed by an incisive through-ball from Toure on the edge of the box, Aguero played a neat flick into the path of Jovetic - who gratefully drilled his side's second under Pantilimon from close range.Sunderland were struggling to create much in the City half but they still came close in first half injury time when a Larsson corner found the head of Rodwell and in the resulting melee the hosts had a penalty shout for handball against Fernandinho turned down.City were in cruise control at the start of the first half, and after 10 minutes in which they passed the ball with aplomb and barely let the home side have a touch of it, they extended their lead with another well-worked goal in the 55th minute.Samir Nasi picked up a short pass in the right side of the Sunderland box and fed Zabaleta, who produced a deft little chip to defy the onrushing John O'Shea and beat Pantilimon to put City 3-1 up.Sunderland's problems had intensified in the run-up to the goal when Fletcher looked to have sustained a problem with his lower back and was replaced by Jozy Altidore for the restart.As City sat back the hosts were given more of an opportunity to string together some moves but they consistently foundered in the final third as the City rearguard, which had shown signs of weakness in the early stages, casually mopped up the pressure.And Aguero wrapped up a sensational individual performance in the 71st minute when he was picked out by City substitute James Milner and turned a deft shot past the helpless Pantilimon to complete the scoring