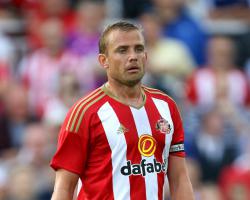 Victor Anichebe was Sunderland's hero as they completed back-to-back Premier League victories despite the Stadium of Light briefly failing to live up to its name.

Anichebe's double after Jermain Defoe had racked up his 150th Premier League goal sealed a priceless win over fellow strugglers Hull and gave the Black Cats, who had Papy Djilobodji sent off for a second bookable offence in stoppage time, renewed hope of dragging themselves out of trouble.

However, they were left sweating when the floodlights went out, prompting a unscheduled nine-minute second-half break.

After order was restored, David Moyes' side killed off the game through the excellent Anichebe to claim their first three-point haul of the season at home in front of a crowd of 41,271 and ease themselves to within two points of the visitors.

On a day when Sunderland honoured 80-year-old Charlie Hurley, captain of the 1964 promotion team, the focus quickly shifted to the present and a future which remains uncertain.

Black Cats keeper Jordan Pickford was called upon for the first time with less than two minutes on the clock when Dieumerci Mbokani showed Djilobodji a clean pair of heels to test him at his near post.

Sunderland threatened sporadically through the muscular Anichebe as he targeted 17-year-old league debutant Josh Tymon wide on the Hull left, but they were desperately unfortunate not to be awarded a 17th-minute penalty when keeper David Marshall appeared to trip Duncan Watmore as Ahmed Elmohamady attempted to shepherd a back-pass to him.

The Tigers almost capitalised on their escape when Sam Clucas pounced upon an error by Didier Ndong to prompt a 19th-minute save from Pickford with Sunderland at sixes and sevens.

However, it was the home side who broke the deadlock 11 minutes before the break when Defoe ran on to Watmore's flick-on and side-step first Curtis Davies and then Michael Dawson before depositing the ball in the bottom corner.

Anichebe passed up a glorious opportunity to increase his side's lead two minutes later when he scuffed wide from Defoe's clever back-heel, but it was the home side which headed for the dressing rooms with the wind in their sails.

Marshall kept Hull in it when he repelled Watmore's close-range effort at his near-post with less than a minute of the second half gone, although the stadium was plunged into darkness by a power cut three minutes later.

Play resumed after a break of around nine minutes with Moyes' men still in the ascendancy, and Tymon had to make a vital block to deny Anichebe after being rolled by the striker.

Ryan Mason squandered a chance to level when he dragged a 65th-minute effort across goal, and the miss proved costly seven minutes later when Anichebe accepted Patrick van Aanholt's pass and cut inside Tymon to blast left-footed past Marshall.

There was still time for Pickford to claw away Robert Snodgrass's overhead kick before keeping out Mbokani's late effort, which saw van Aanholt block twice on the line in the aftermath, but Anichebe made sure deep into injury time with a rasping drive off the inside of the post.