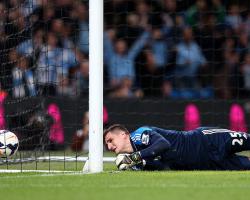 Connor Wickham made it five goals in three games as Sunderland eased themselves out of the Barclays Premier League relegation zone with victory over 10-man Cardiff.

The 21-year-old, who has spent much of the season on loan in the Sky Bet Championship, headed the Black Cats into a 26th-minute lead to add to the double he scored at Manchester City and his strike in last weekend's 2-1 win at Chelsea, and then sealed the win with a late header.

He played a key role in the second goal, too, as he forced defender Juan Cala into the ill-judged challenge which cost him a red card and his side a penalty.

Fabio Borini made no mistake from the spot and, when substitute Emanuele Giaccherini added a third 14 minutes from time, the game was won, to the delight of the bulk of a crowd of 45,859.

It was just Sunderland's second league victory at the Stadium of Light in 11 attempts and the first time they had put together back-to-back wins in almost three months.

But more importantly, it lifted them from the foot of the table and out of the bottom three, albeit only on goal difference, as they leapfrogged Cardiff, Fulham and Norwich.

Their ability to stay there will be severely tested at Manchester United next weekend, but with West Brom and Swansea to come on Wearside in the final two fixtures of an eventful campaign, their fate is at least in their own hands.

Cardiff will return to the north-east on Saturday to face Newcastle before a final-day clash with Chelsea in South Wales knowing they will almost certainly need to win at least one of those games to survive.

Both sides ran out knowing victory would take the winners out of the drop zone, but it was Sunderland who took the game by the scruff of the neck as they refused to let the momentum gained from last weekend's heroics at Stamford Bridge slip away.

Typified by pugnacious midfielder Lee Cattermole, they met the Bluebirds head-on from the first whistle in front of a bumper crowd which turned up knowing exactly what was at stake and determined to play its part.

Full-back Marcos Alonso saw a third-minute snapshot blocked at source and Wickham tested keeper David Marshall at his near-post seconds later with a drive from an unlikely angle.

But Cardiff managed to weather the early storm and responded by winning a series of corners of their own and from one of them, midfielder Mats Daehli screwed a shot high and wide to remind the Black Cats that they would not have things all their own way.

However, the tide changed once again after 26 minutes when Wickham was left unaccompanied beyond the far post to meet Sebastian Larsson's corner and head it back cross goal and inside the upright to open the scoring.

There was a tangible sense of relief on Wearside, albeit one tinged with the knowledge that there was a long way to go both on the afternoon and in the race for survival.

Jordon Mutch, Santiago Vergini and Gary Medel all went into referee Phil Dowd's notebook as tempers frayed, but it was Cala who was to incur the official's wrath as the half drew to a close.

The defender's poor touch allowed Wickham to steal in and he instinctively dragged the striker back, initially outside the box.Wickham stayed on his feet and Dowd played an advantage, but when the attack came to nothing, he pointed to the spot and produced a red card, much to Cala's horror.

Borini nervelessly converted from 12 yards to double Sunderland's lead and give them real hope of escaping the drop.Bluebirds boss Ole Gunnar Solskjaer replaced Don Cowie with Wilfried Zaha at the break and asked midfielder Medel to slot in alongside skipper Steven Caulker at the heart of his back four, and they found themselves under concerted pressure once again as the home side went for the kill.

But Cardiff refused to lie down and die and, despite their numerical disadvantage, launched a fightback which saw Mutch head across the face of goal from a 57th-minute corner.

Goalkeeper Vito Mannone was called upon for the first time to keep out Peter Whittingham's deflected free-kick seven minutes later, but Borini might have wrapped up the win 18 minutes from time had Marshall not pulled off a fine instinctive save to keep out his shot from Jack Colback's cross.