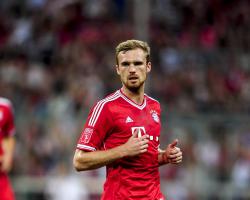 The 25-year-old was signed from Bayern Munich during the week and came on at White Hart Lane with the scores level - but made several errors as Spurs came from behind to seal a 4-1 win.

Patrick van Aanholt had fired the Black Cats ahead only for Christian Eriksen to level for the hosts 91 seconds later and, with Sunderland on course for a point, Allardyce introduced Kirchhoff from the bench in place of Danny Graham.

Shortly afterwards Mousa Dembele arrowed in a second for Tottenham before Kirchhoff's token attempt at blocking an Eriksen shot from distance saw the ball loop up off his leg and past debutant goalkeeper Jordan Pickford.

The defender's abject afternoon was compounded when he tripped Danny Rose in the penalty area to allow Harry Kane to sweep home the resulting spot-kick and Allardyce admits the former Germany Under-21 international needs time to adapt.

"There wasn't a lot he could do about the deflection," he told BBC Sport.

"But the penalty, you don't hang a leg out there unless you're certain you'll win the ball

Hopefully he learns from today.

"Our legs were running out and I wanted to make sure we had the energy to stay in the game.

The extra defender was to tighten it up."

Allardyce, whose side remain in the bottom three as they battle against the drop, also hit out at his players for conceding so soon after getting in front at White Hart Lane.

It's one of the reasons we ended up losing," he added.

It was a really sloppy thing to do

We ran out of legs in the end.

"In the last quarter you could see physically we were tiring

I changed the shape but that didn't work.

"The scoreline, 4-1, looks more comfortable than it was

While Sunderland remain in a scrap for survival, Spurs got back to winning ways having lost at home to fellow top-four hopefuls Leicester in midweek.

Head coach Mauricio Pochettino was pleased with his side's reaction in both bouncing back from that loss and recovering so swiftly from van Aanholt's opener - but is refusing to talk of winning the title.

"It was a very important victory a good reaction," he said.

"It was a good performance

I'm very pleased, another great effort from the team and the squad and I'm very happy.

"I think it is early to start to speak about the title, we need to improve a lot and learn a lot, we are a young squad

It is important to keep working hard because in football the situation can turn quickly.

"It is true we are in a good position, we are fourth in the table but we need to keep working hard and to win the next game.

That is the realistic time (to talk about winning trophies)."