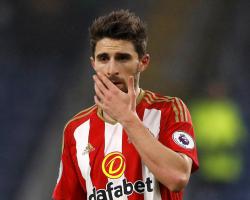 The bottom-of-the-table Black Cats gave as good as they got before the break, and then battled manfully in containing an out-of-sorts Spurs to claim a 0-0 draw and another point in their quest for survival.

Spurs boss Mauricio Pochettino will certainly feel two points were left at the Stadium of Light and opposite number Moyes knows only wins will get his side out of trouble - but the Scot was given cause for hope by a spirited display as he attempts to dig the club out of a hole on the tightest of budgets.

Moyes, who had earlier seen a final deadline day bid to land Leicester striker Leonardo Ulloa fail, went into the game knowing his team would have to exceed its recent standards to emerge with any reward.

They did just that during an opening 45 minutes which saw Spurs enjoy plenty of possession, but do relatively little with it as Harry Kane on his return from a groin injury and Dele Alli were largely becalmed.

Left-back Danny Rose and Heung-min Son prospered in the early stages, but apart from a Kane cross which Lamine Kone had to hack away and a rasping Victor Wanyama shot which was parried by Vito Mannone, they created little of note.

As a result, the Black Cats grew in confidence and actually created the better openings before the break.

Jermain Defoe, whose goals have proved so valuable to the club in the last two years, set the tone with an adventurous ninth-minute run which took him past Toby Alderweireld and Wanyama, only for his shot to be blocked.

Had the half's best chances fallen to Defoe, Sunderland, for whom midfielder Jack Rodwell may have been fortunate to escape with just a yellow card for an awful challenge on Mousa Dembele, might have gone in at the break, but they fell instead to Fabio Borini, who failed to make the most of them.

Defoe once again turned Alderweireld and fed the Italian with 21 minutes gone, but with the goal at his mercy, he miscontrolled and the chance had gone.

Borini set himself up two minutes later after running on to Eric Dier's weak clearing header, but although the path to goal opened up invitingly, he fired straight at keeper Michel Vorm to let the visitors off the hook.

Kane only just failed to connect with a Son cross within seconds of the restart and Mannone was called upon to claim a dipping Christian Eriksen free-kick 10 minutes later with Spurs finally slipping into gear.

Full-back Kyle Walker saw a 63rd-minute strike fly over the top with the help of a deflection off opposite number Javier Manquillo and Wanyama powered a header inches over from Son's cross from the resulting corner.

Son's 70th-minute shot from Kone's poor header also cleared the bar and Dier headed just wide at the death - but Tottenham were simply unable to make the pressure tell.