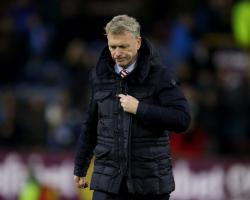 Moyes has little time to pick the bones out of his team's 4-1 loss at Turf Moor because they are back in action two days later against Jurgen Klopp's in-form Reds.

In Burnley, the crux of the problem for Moyes was clear as his team unravelled at the back as soon as Lamine Kone went off injured midway through the first period.

And the Black Cats boss knows his side will have to tighten up defensively when facing the Premier League's top scorers if they are to pull off an upset against a team targeting a fifth win on the bounce.

"We're going to have to defend much better," Moyes said.

"It'll be a different type of game but we've got to quickly get ourselves ready and prepare for that.

Without Kone at Burnley, Sunderland fans got a glimpse of what the next month may look like as a central-defensive partnership of John O'Shea and Papy Djilobodji failed to deal with Andre Gray

The 27-year-old hurt himself when sliding in to an advertising hoarding to try and stop a Gray shot and despite initially appearing fine to continue, he was withdrawn in the 24th minute, with Moyes now unsure if he can feature on Monday

"It looked as if he went into the hoardings - I thought he was going to be okay but I couldn't really see it from the dugout," he added

"It looked not so bad to me at the time but I've got no idea."

Moyes also lost Victor Anichebe to a problem before the break as he substituted himself having appeared to strain his hamstring when chasing George Boyd on the stroke of half-time.

"It looks like he's pulled his hamstring," Moyes said of a player who had been in fine fettle.

We just need to see how he is."

Defender Jason Denayer is another concern due to a hamstring problem that prevented him from even making the squad in east Lancashire.