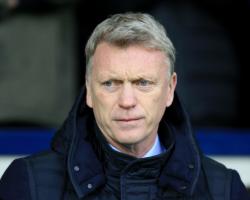 The Black Cats are back at the bottom of the Premier League table after a 2-0 defeat to West Brom.

Darren Fletcher and Chris Brunt were on target for the Baggies with superb strikes but Moyes felt both goals were avoidable.

"Our overall level of play wasn't so bad, even in the first half, but we are giving away goals and goals change matches," he said.

"We played better in the second half but, and I've said it before recently, we're giving poor goals away at the moment

We are doing everything we can to stop it from happening but it's a disease we've got at the moment.

"You've got to press players and put your body in where it hurts sometimes, put your face in there if needs be and hope you'll get dangerous play.

"But take nothing away from Darren Fletcher's goal, it was terrific

We gave them too much time but, again, the second goal was a brilliant strike as well."

Moyes' team had actually started well, without ever worrying Ben Foster in the home goal, but all started to go wrong for Sunderland just before the half-hour mark as West Brom applied some pressure for the first time.

However, w ith 30 minutes on the clock the Baggies went ahead when Fletcher brilliantly brought the ball down on his chest inside the box and sent a volley beyond Vito Mannone

Rondon saw another goal-bound shot blocked, this time by Sunderland defender John O'Shea, but the visitors were rocking and they were soon two goals behind

A Nacer Chadli strike hit the crossbar before Mannone denied Phillips once more, but Brunt pounced on the rebound to crash home a volley from the edge of the penalty area after 36 minutes

Despite a ninth defeat in 11 Premier League away matches this season, Sunderland are only three points adrift of safety

"We are making mistakes and I'll take the responsibility for that because I pick the players," Moyes said

"But we aren't that far away - three points

"We helped with our own downfall at times but credit to the boys, they stuck at it

I thought George Honeyman was our best player today by a long way, he played really well, so we can take some positives from it."

West Brom stay eighth after a fifth win in six home matches and they extend the gap to four points over ninth-placed Stoke, who bought Saido Berahino from the Baggies on Friday

The striker's move to the bet365 Stadium brought to an end an 18-month transfer saga, and West Brom boss Tony Pulis hopes Berahino can now rediscover his best form for Mark Hughes' team.

"You've got to give credit to Sunderland because they could have thrown the towel in but they had a right go in the second half and made it difficult for us," said Pulis

The players really put a shift in.

"I wish Saido all the best and he is joining a very, very good club

What he needs to do now, and it's what I've been saying all along, is get his head on his football and concentrate on that and wash away all the people and all the stuff that's been surrounding him for a long time now.

"His goal-scoring record before all this nonsense started was exceptional and now this is a great opportunity for him to get back to that kind of form."