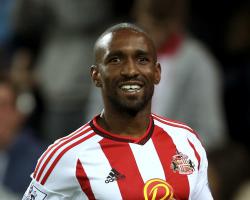 The 33-year-old, drafted in to save the Black Cats in January last year, struck with 18 minutes remaining and then again in injury time to set up a 3-1 win which moves Sam Allardyce's men seven points clear of basement boys Villa - although they are still in major trouble.

Sunderland gradually grew into a game which they started poorly and took a 30th-minute lead through Patrick van Aanholt's deflected shot, and although Carles Gil levelled after the break with a sumptuous volley, Defoe ensured the points remained on Wearside to the delight and relief of the locals among a crowd of 41,535.

It was a game neither side could really avoid to lose if they were to retain any hope of digging themselves out of trouble, and Villa's plight is looking increasingly bleak with no league victory since the opening day of the season.

Goals have been at a premium for both sides in recent weeks and Duncan Watmore for Sunderland and Leandro Bacuna twice for the visitors both missed the target after being presented with early opportunities.

However, Jordan Veretout did force a fine save from Vito Manonne with an acrobatic volley from Bacuna's eighth-minute cross.

Villa continued to dominate possession without putting Mannone under further pressure, and the home crowd was starting to grow restless when Sam Allardyce's men took the lead against the run of play with half an hour gone.

Left-back Van Aanholt was allowed to advance and fire in a speculative left-foot shot which Guzan looked to have covered until defender Micah Richards stuck out a leg and diverted it into the net.

Sunderland were little better in the immediate aftermath of the goal and although Van Aanholt curled an injury-time free-kick just wide, the visitors finished the first half on the front foot.

Defoe might have extended Sunderland's lead with 57 minutes gone after running on to Yann M'Vila's pass and cutting inside, but Guzan got down well to collect his effort.

Van Aanholt went close from distance with a stringing attempt five minutes later with the Black Cats starting to gain the upper hand, but their lead evaporated in spectacular style with 63 minutes gone.

Substitute Adama Traore powered his way past Van Aanholt and then Wes Brown down the Villa right before crossing to the far post, where Gil leapt to dispatch a sweet volley across the helpless Mannone and into the net.

But Sunderland were far from finished and Defoe chose the perfect moment to demonstrate his enduring quality given the right kind of service when he controlled Johnson's 72nd-minute pass and thumped the ball past Guzan at his near post.

There was more to come from the former England international too when substitute Ola Toivonen picked him out in front of goal two minutes into stoppage time, finishing well to seal a priceless win.