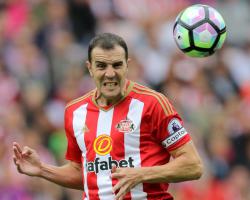 Chief executive Martin Bain painted a bleak picture last month when he revealed Moyes would have "very limited" funds with which to rebuild his squad, although the Scot has since been encouraged by conversations with owner Ellis Short that there may be a little more leeway than was first thought.

The matter is complicated by the fact that the club has debts of around ÃÂ£140million and is perilously close to the wage cap dictated by the Premier League's financial regulations.

But with nine senior players injured - all of whom have been regular starters this season - and Lamine Kone, Didier Ndong and Wahbi Khazri now on African Nations Cup duty, the Stadium of Light cupboard is bare.

Skipper O'Shea knows the situation will allow some of Moyes' younger players a chance to show what they have got, but he has been in the game long enough to be aware an injection of both quality and experience, if on a budget, is required if the Black Cats are to avoid the drop from the Premier League this time around.

He said: "Hopefully we can get a bit of help in

The injuries are tough but also in adversity too, players have to step up and take responsibility.

"Didier was fantastic [in Monday's 2-2 draw with Liverpool] - obviously we lose him, but it was good to see the application he showed for the whole game

Obviously we lose him for a few weeks, Lamine and Wahbi too.

"But look, it's a chance for other lads, some younger boys maybe, to get a chance

And you never know, we might get that bit of help too."

The extent of Moyes' misfortune was laid bare by the injury list with which he had to contend for the home clash with the high-flying Reds - Jordan Pickford, Kone, Lee Cattermole, Jan Kirchhoff, Jason Denayer, Paddy McNair, Lynden Gooch, Duncan Watmore and Victor Anichebe were all sidelined, while full-back Billy Jones was suspended.

With Pickford, Cattermole, Kirchhoff, Gooch and Watmore all missing for months rather than weeks, Sunderland's need could hardly be more pressing.

In the circumstances, their performance against Jurgen Klopp's Liverpool was as surprising as it was impressive.

They trailed to Daniel Sturridge's 20th-minute header, but the ever dependable Jermain Defoe levelled from the spot five minutes later and repeated the feat at the death to cancel out Sadio Mane's 72nd-minute strike.

That took the frontman's tally for the season to 11 goals, although he had to fight for the right to snatch a point with Fabio Borini keen to have his share of the glory.

O'Shea said with a smile: "If I'd have seen Jermain pass the ball over, first of all I would have been shocked, but after I would have said, 'No, no, the man in form'.

"Fabio has been out for a little while

It's great to see he wants to take the penalty

Probably JD didn't need that added bit of pressure too, but he's well able for it.

"It was a nice game to play against Liverpool to get something from and we did, and we look forward again now

Burnley in the FA Cup, that's the next one."