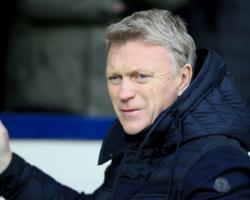 Saturday's 2-0 loss at The Hawthorns saw Sunderland slump back to the bottom of the Premier League table and the players were booed off at both half-time and full-time by those fans who travelled.

The Black Cats, suffering with absences through injury and players away at the African Nations Cup, have now lost nine of their 11 away matches in the league, scoring just six goals, and are three points adrift of safety.

Moyes said: " I totally understand them

I'm a supporter myself, maybe if we had three points more we might be where people would expect us to be

But we are not that far away

A win would have taken us out of the relegation zone

If any fans know about this situation it is our supporters in recent years."

"Having Victor [Anichebe] back was a big positive for us, however, he did pick up a knock so we will need to check on that

We've got over a week until our next game now, hopefully that will let us get some more players back in training, we need it."

Superb first-half goals from Darren Fletcher and Chris Brunt gave West Brom a fifth win in six home matches, keeping them in the frame as contenders for European football next season

As well as getting on the score sheet, Fletcher was the driving forced behind the success, winning plenty of second balls, barely surrendered possession and kept the Baggies ticking along

And the captain's performance drew praise from manager Tony Pulis, who said: " Fletcher is fantastic

He's been wonderful in the dressing room, on and off the pitch, he's got great respect in there and everybody's pleased

"He's one of those players

Every time he does something well, you're pleased for him."

Pulis was able to give a debut to latest news signing Jake Livermore, following his arrival this week from Hull, and the West Brom boss added: " It was difficult for Jake

Kempy (Dave Kemp, assistant manager) didn't want to get him on there because he's not worked with us, he just turned up Friday

"He doesn't know what we do, what we don't do, how we do it, and we're very structured in a lot of ways

"I'm pleased (with the signing), he'll bring a lot to the table but he'll have to learn what we want to do and the way we want to do it."