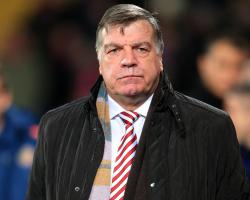 The 61-year-old, a vocal advocate for the introduction of a winter break in English football, has made his feelings abundantly clear over a fixture list which sees the Black Cats face league leaders Arsenal at the Emirates Stadium in the third round on Saturday before trips to Swansea and Tottenham, all inside eight days.

Allardyce is a traditionalist whose love for the FA Cup is unquestionable, but having been handed the task of preserving the club's top-flight status by owner Ellis Short in October, that remains his focus.

He said: "It's always the Premier League

We are in the bottom three and that makes our status in the Premier League the most important thing - and this is the club priority, this is the priority from Ellis Short downwards.

"The emphasis at this football club, at every football club I have been at and every owner I have worked for says we have to stay and we have to be in the Premier League for next season.

"That's always the first priority, notwithstanding we all love the FA Cup, we'd all love to do exceptionally well in it

But look, if you win the FA Cup, like Wigan did and who now find themselves in League One having been relegated after winning that FA Cup..

This club cannot afford that."

Sunderland, of course, have won the FA Cup twice, most famously in 1973 when as a second division outfit, they defeated Don Revie's Leeds at Wembley in memorable fashion.

Allardyce was a teenager looking on from afar at the time, but he understands the affection in which the competition is held on Wearside as a result.

He said: "Everybody has enjoyed the FA Cup at some stage or other and everybody would like to get to the final and experience that.

I can remember that vividly myself and it had nothing to do with me, I just watched it on the television.

"We are all in love with the FA Cup, but unfortunately priorities change in football and our priority is the Premier League."

Allardyce will ring the changes as he attempts to manage the competing demands of a week which will involve around 1,800 miles of travel as well as the games, although he insists only one youngster - the clever money is on keeper Jordan Pickford following his return from a loan spell at Sky Bet Championship Preston - will start against the Gunners.