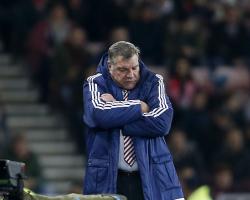 Jermain Defoe's second-half double at the Stadium of Light helped to secure a 3-1 win, the Black Cats' first since November 28, and put them seven points clear of bottom-of-the-table Villa.

However, they remain four points adrift of safety and Allardyce acknowledged that was the most important factor to consider on Saturday evening.

Asked how he viewed the situation, he replied: "Dire, still, don't worry about that

This has given us a little bit of relief, but we must be resilient in terms of picking up points from here on in.

"We have got to go on a run of games where we are undefeated, for me, try to get draws and pick the odd win up, and if we go eight games and we have only lost one and drawn and won a couple, not losing four and five on the trot - we just can't do that.

"We can't afford, for me, to be looking at doing that sort of thing again, so we have got to try to push on and like we always say, 'if you can't win, make sure you don't lose'."

Sunderland took a 30th-minute lead against the run of play when Patrick van Aanholt's shot was deflected past goalkeeper Brad Guzan by Micah Richards.

Villa levelled courtesy of Carles Gil's stunning 63rd-minute volley, but 33-year-old Defoe struck with 18 minutes left and then again in injury-time to clinch victory after a dramatic improvement in the service coming his way.

Allardyce said: "It's about us getting him that service and as the second half went on, we got more and more of that service in to him.

Villa boss Remi Garde spoke to broadcast media after the game, but did not attend the post-match press conference as travelling fans gathered outside the stadium, singing "You're not fit to wear the shirt" as the players boarded the team coach.

Asked about falling short of his six-point target over Christmas, the Frenchman told radio reporters: "We had a target

We didn't achieve it, but there is still light in front of us

There are games to play.

"We only have one direction to be fair, and that is to work more and to fight to try to win games

You never know in football

I feel that the players deserve better than we have currently.

"I think we were quite close to getting a better result, to be fair

We conceded a silly first goal that we shouldn't have

I said to the players at half time we would have opportunities in the second half because I thought my team was playing quite well.

"We had some movement and we equalised, which was very important to us, but we didn't keep the score for a long enough time

We didn't play a bad game, but in our situation, this is not the most important thing - that's the result.

"It's like in every game - we're missing quality sometimes."