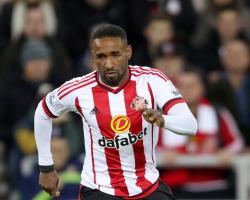 The 33-year-old striker demonstrated his career-long ability to find the back of the net with a priceless double in last Saturday's 3-1 Barclays Premier league victory over Aston Villa.

Defoe, who arrived at the Stadium of Light from FC Toronto almost 12 months ago, has been linked with a return to former club Bournemouth, where he enjoyed a successful loan spell during his time at West Ham.

However his current manager insists that his most potent frontman will not be leaving unless chairman Ellis Short is presented with a a proposition he simply cannot ignore.

Allardyce said: "We haven't had a bid for him, for one, and I suppose if I had had a bid for him, I'd have probably turned it down - unless it was that big a bid that the owner had told me, 'This bid is so big, Sam, that we can't afford to turn it down', and every club has that scenario.

"But no, we haven't had a bid for Jermain and no, we don't want to sell him."

It has been a difficult calendar year for the Black Cats, who survived relegation once again at the end of last season only to find themselves involved in another desperate scrap this time around.

Defoe has contributed a relatively modest 10 league goals to date, five of them this season, but produced two trademark finishes last weekend despite playing as a lone striker.

Allardyce said: "There's always been a belief that maybe he can't play up there on his own

He's played up there a couple of times on his own now and I am more than willing to continue down that line.

"Hopefully it would be Jermain who came to me and said, 'Look, it's really not working for me, Gaffer, on my own up there

You have got to stick somebody with me'.

"That would be the only time, I think, that I would consider not doing it

Allardyce's focus during the opening week of the winter transfer window has been at the other end of the pitch and Bayern Munich defender Jan Kirchhoff was on Wearside on Thursday looking to tie up a ÃÂ£750,000 switch.

Allardyce said: "Jan's in the building

We are trying to complete a deal right now, so hopefully by the end of today, it will be completed.

All the paperwork and some negotiation is just to be finally completed, and I hope that's going to be a new signing for us by the end of today."

Meanwhile, Allardyce confirmed his pursuit of Lorient defender Lamine Kone, whose club-mate Lamine Gassama has rejected a move to Sunderland, had fallen through, and that Kirchhoff's imminent arrival meant an end to his interest in QPR's Steven Caulker.