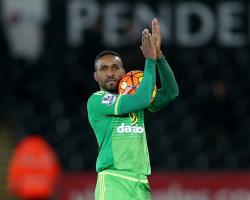 Defoe took his Barclays Premier League tally for the season to nine as Sunderland moved above neighbours Newcastle on goal difference and within a point of Swansea, who occupy the final safety position.

Asked if Defoe's goals were the key to leading Sunderland from trouble, Allardyce replied: "I think so

"We've got Jermain scoring all our goals, so at the moment we've only got one

"Irrespective of whether you're in a dominant position or not, he can change a game in your favour by giving him one chance and him scoring."

Defoe's heroics ensured back-to-back league wins for Sunderland, but the game was shrouded in controversy with rookie Premier League referee Graham Scott criticised by both managers after the game.

Scott was only appointed for his fourth Premier League game on Monday after original referee Andre Marriner fell ill, but t he Oxfordshire official was to find himself in the firing line

And Swansea defender Kyle Naughton received a straight red card close to half-time with the score at 1-1, although the full-back clearly won the ball for his challenge on Sunderland midfielder Yann M'Vila.

"I thought it was a soft red card

I thought it was a yellow card," Allardyce said about Naughton's dismissal.

For me it's get up and get on with it, give him a foul

"I thought the penalty against us was a very soft penalty and that changed the game because we were in total control at that point."

"I don't want to criticise referees but I think he got the big ones wrong tonight," Curtis said.

"Decisions can take the game away from you

We were fortuitous with the penalty decision for us.

It is very difficult these days to do that

"I thought he won the ball and you only have to look at the video and he has won it cleanly.

"It is something we will try to appeal first thing tomorrow morning."

Swansea have only won once in six league games since Curtis succeeded Garry Monk last month and, having sold England midfielder Jonjo Shelvey to Newcastle for ÃÂ£12million, the need for reinforcements is essential.

"I have spoken to Huw (Jenkins, Swansea chairman) about players," Curtis said.

"I can't give names but this result will highlight we do need to being someone in sooner rather than later.

"It is going to be a slog between now and the end of the season."