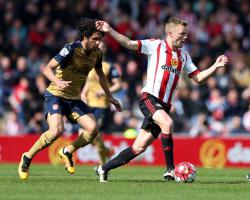 The Black Cats rolled over in a desperate start to Saturday's 3-1 home defeat by Stoke to leave themselves deep in relegation trouble on a day when a win would have lifted them out of the bottom three.

However, they have an early opportunity to restore some confidence on Tuesday evening when they travel to Burnley for an FA Cup third-round replay, and Larsson is expecting a concerted response.

He said: "Listen, that's all you can do, keep plugging away and keep working, keep making sure we improve, we are better in our performances, we get more points (and we will) hopefully progress in the cup.

"I understand if people don't have a lot of belief in us at the moment, but that's all we can do

We're going to keep working hard and keep making sure that we give ourselves every chance of getting out of trouble."

The sides played out a drab 0-0 draw at the Stadium of Light on January 7, although that result, if not particularly the performance, represented a significant improvement on what had happened in the league at Turf Moor a week earlier.

David Moyes' men travelled to Lancashire on New Year's Eve well aware of Burnley's remarkable home form, but returned on the wrong end of a 4-1 scoreline as Andre Gray plundered a hat-trick in 22 minutes either side of half-time with little hindrance from the visitors.

Sunderland responded with a spirited display two days later to draw 2-2 with high-flying Liverpool on Wearside, and they will need a similar reaction if they are to stand any chance of booking a fourth-round clash with either Fleetwood or Bristol City.

Injuries continue to blight manager Moyes with full-back Billy Jones, who was an unused substitute at the weekend following his recovery from a hamstring problem, the only senior player likely to give him a fresh option.

Asked if he would freshen things up, the manager said: "I have not got my head around it yet because I am still feeling and getting over this one a little bit

I'll look at it later and make a decision."