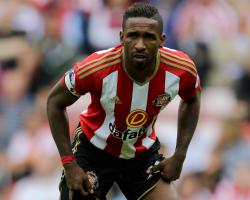 The 34-year-old striker has found himself in the headlines in recent days with former club West Ham having firmed up their interest in him with a ÃÂ£6million bid, which was instantly rejected.

Furthermore, the Hammers - and indeed any other interested parties - have been told Defoe, who has scored 11 Premier League goals so far this season, is simply not for sale.

Asked about the situation on a day when differing reports suggested the London club had both tabled an improved ÃÂ£13million bid and ended their interest, Moyes was unequivocal in his response.

He said: "We have had an offer and we told them that he wasn't for sale

It's come from the owner and we have said that he's not for sale.

He's really important to us, everybody knows that and the club has already come out and said that.

"There has been very little said from Sunderland Football Club

The talking has all come from other people, not from here."

When asked about talk of a ÃÂ£13million offer, Moyes said: "Totally wrong."

Defoe, who joined the Black Cats from MLS side Toronto in January 2015, signed a contract extension which will keep him at the Stadium of Light until the summer of 2019 in June last year, after his 15 goals last season helped the club fend off the drop to the Sky Bet Championship.

However, Bilic's admiration, coupled with the fact that he grew up with the Hammers after joining them from Charlton as a 16-year-old, have fanned the flames.

Through it all, the man himself has maintained his composure and Moyes is confident he will not be affected by the ongoing saga.

In addition, the Scot is hoping the goals will continue to flow and if they do, he is confident he can join the ranks of the exalted on Wearside alongside the likes of Kevin Phillips and Niall Quinn.

In a way, he's in a real purple patch in his career, so hopefully he is enjoying it and he's steady with that.

"If he keeps scoring the goals at the rate he is, then he's going to put himself up there because of his goals and what he's done.

"This club has had some really good goalscoring centre-forwards over the years, so I'm sure Jermain will want to get in amongst that group and he's got a great chance."

Defoe is likely to be included in the squad for Saturday's FA Cup third round clash with Burnley at the Stadium of Light, although it would be no surprise if his involvement came from the bench with Moyes keen to protect his biggest assets despite a selection crisis.

The manager said: "It's difficult because the league is the priority, but the FA Cup is something I have been fortunate enough to get to a final in

I have not won it, but if you could put it on your bucket list, it would definitely be something you would want to do."