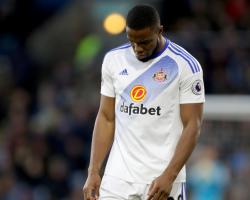 The 28-year-old, who had resurrected his career on Wearside after finding himself without a club last summer, damaged knee ligaments during Saturday's 2-0 Premier League defeat at West Brom and is unlikely to play again until April.

Anichebe, who has scored three goals for the club this season, admitted his misfortune had left him feeling the lowest he has since suffering a serious knee injury in a challenge with then Newcastle midfielder Kevin Nolan back in 2009.

Writing on his Instagram account, Anichebe said: "If I was to say I was gutted (it) would be a complete understatement

This is probably the worst I've felt about getting injured since that horrendous tackle in 2009!

"I don't usually cry like that, but this has been a really hard one to take as I feel so settled here and know I'm important to the team

And just as I was getting back to my best and even better..

"I know you guys are very frustrated just as I am, but sometimes these things happen, I don't know why

I just have to be as positive as I can, pray and do the work needed to be back as quick as possible.

I've been here before and came out stronger and I will again."

Anichebe's loss comes as a major blow to manager David Moyes as he attempts to steer the club out of relegation trouble once again.

Results over the weekend left the Black Cats at the foot of the table and although they are only three points from safety, Moyes' men have won just one of their last eight league games.

However, Anichebe is confident they can get themselves out of trouble.

He added in a message to the club's fans: "You may feel like everything is going against us as I'm typing this, but I believe and have complete faith that we will improve and pick up the results needed to get us out of the position we find ourselves in.

"Believe me I know it's difficult, but stay positive and keep supporting the team

We really need all of you to succeed!"